PIA assures to abide by its assurances to Senate body

PIA assures to abide by its assurances to Senate body

ISLAMABAD: Pakistan International Airlines on Friday assured that it would abide by its assurances earlier given to the Senate Standing Committee on Defence.

This assurance was given by PIA at a meeting of the Standing Committee which was held at the Parliament House under the Chairmanship of Senator Nisar Ahmed Memon.

The meeting was held on a requisition by Senators Rukhsana Zuberi, Mouhim Khan Baloch and Farhatullah Khan Babar under Rule 163 (4) of the Rules of Procedure and Conduct of Business in the Senate, 1988 regarding non-implementation of various assurances given by the PIA management.

The committee was told that as per PIA's commitment, Traffic Collision Avoidance System (TCAS) was installed on F-27 Aircraft for operation to Muscat and flights are operational on that route and commitment has been met.

However, for the operation to Sharjah, another costly instrument, ie Required Navigational Performance-5 (RNP-5) was required to be installed as a pre-condition for operating F-27 to Sharjah from the coastal areas of Balochistan.

The PIA management approached the General Civil Aviation Authority of the UAE for grant of waiver for operation of PIAs F-27 Aircrafts for a period of six months only which was refused by GCAA of UAE as such flights are not operational to Sharjah.

Chairman PIA Tariq Kirmani informed the committee that the national carrier, as per its business plan to modernise the airline, intends to purchase seven new ATR42-500 aircrafts fitted with TCAS and RNP-5.

He said that PIA was planning to get the two such aircrafts from the manufacturers on lease before the delivery of seven new ATRs next year.

These aircraft will be made operative on Turbat - Sharjah and Turbat-Dubai as well as Gilgit to provide facilities to people of Northern Areas by the end of this year.

He informed the committee that PIA would also get planes on lease for all Umrah and Hajj flights.

The committee, however, asked the Board of Directors of PIA to evaluate the recommendations made by the committee members regarding Hajj and Umrah operations.

The members of the committee noted with satisfaction the assurance of the chairman PIA to honour the management's earlier commitment to operate PIA flights to Sharjah and Dubai from Turbat and Gilgit.

The chairman of the committee directed the PIA management to ensure that any information provided to the committee should be well thought of and should not appear to be concealment of the facts from the committee.

The committee appreciated the good work done by Senator Rukhsana Zuberi by her research on PIA information and it directed the PIA management to provide the copies of log books of parts being fitted on sold Boeing for information of the committee members and record.

Minster of State for Defence Zahid Hamid, Chairman PIA Tariq Kirmani and senior officers of the Ministry of Defence and PIA were also present.

Thanks Abbas for posting this.
It's just another example of the fiasco surrounding the turboprop issue.Why waste time focusing on expensive upgrades for the F-27s instead of making a final and binding decision on their immediate replacement.
Hope everyone in northern Pakistan is safe.
Salaam, Mike.
Top

PIA flights to Muscat are flown by two Fokker F-27 Mk500s acquired by PIA on dry lease from Expo Aviation of Sri Lanka. These two leased Fokkers are fitted with TCAS system, I remember a forum member (Sting Ray I think) posted this info on forum some months ago.

Here's photo of one of these two leased Fokkers: 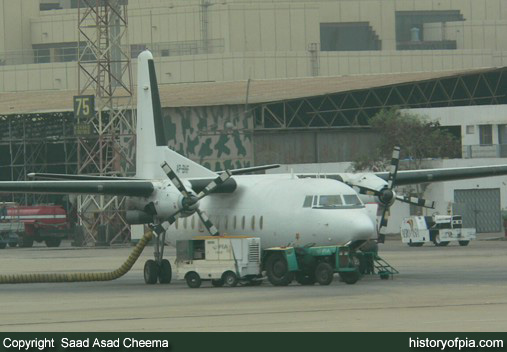 Chairman PIA Tariq Kirmani informed the committee that the national carrier, as per its business plan to modernise the airline, intends to purchase seven new ATR42-500 aircrafts fitted with TCAS and RNP-5.

He said that PIA was planning to get the two such aircrafts from the manufacturers on lease before the delivery of seven new ATRs next year.

On PIA's website there's tender for wet lease of three Turboprops. Probably these will come from ATR?

Following is this tender's info:

Pakistan International Airlines immediately requires three, 48 to 50 seater turbo prop aircraft on wet lease. The aircraft should not be more than five years old. The lease may be for one to two years starting from November 2005. The aircraft will generally be operated on domestic and regional routes.

The offer should be submitted in the form of sealed bid on or before October 10, 2005, at 1200 hours (Pakistan Standard Time) on the below mentioned address.

For detailed instructions, terms and conditions of the tender (that form an integral part hereof and are hereby incorporated by reference) kindly click on the following link:

Get Tender documents for Wet Lease of Turbo Prop Aircraft

or obtain the same from:

Thanks Abbas
I was not aware that these aircraft were leased and therefore don't need the upgrades.Notwithsanding this I think we all agree that PIA should put an end to the long running saga of the F-27 repacement.
My condolences to all Pakistanis on this weekends tragedy.My prayers are with you all.