Pakistan State Oil (PSO) has expressed its inability to serve only the loss-making airports if the profitable fuelling facility at Karachi’s Jinnah International Airport is auctioned out to a private supplier by Pakistan Civil Aviation Authority (CAA).

PSO says, "PSO be­ing a public sector entity cannot agree to operate at loss-making airports only, while we are being removed from a major airport on the pretext of promoting competition."

"CAA had issued a tender for establishment of jet fuel refuelling facility at Skardu airport, PSO explained that flights for Skardu got two-way fuel from Islamabad airport and due to the high road transportation cost, fuel price at Skardu airport would be very high, discouraging airlines to refuel from Skardu. Yet in the national interest, PSO participated in the tender and agreed to establish a mobile facility for a temporary period to support the government vision to promote tourism", says PSO.

Hascol Pet­ro­leum, had approached the CCP complaining that the CAA had not been allowing them to establish fuel farm at Karachi airport for jet fuel business. Subsequently, the CCP directed the CAA to tender the existing Fuel Farm i.e. Eastern Joint Hydrant Depot (EJHD), a joint venture of PSO, Shell Pakistan and Total Pakistan for past six decades.

PSO later challenged the CCP direction before the appellate tribunal, which is pending adjudication.

The PSO chief pointed out that the CAA was also planning to offer loss-making Sukkur, Nawabshah and old Gwadar airports for takeover and establishment of jet fuel facilities under ‘direct contracting’, without considering the option of tender. He complained that the CAA’s current approach was not public-sector friendly, as it was asking PSO to operate at all loss-making airports and “at the same time evicting PSO from Karachi airport which is to some extent a viable business option”.

PSO officials said the government had been approached to not only look into the matter but also ask the CAA to adopt a uniform policy for all airports whether it seeks to lease out jet fuel refuelling facilities at all airports through tender or through direct allotment to PSO.

“It is unfair to expect PSO to feed smaller airports at a loss while major airports are offered for competition which should be on overall basis instead of pushing for selective competition,” an official said.

Civil Aviation Authority (CAA) established under the Pakistan Civil Aviation Authority Ordinance - 1982 (PCAA Ordinance 1982) is responsible for promotion and regulation of civil aviation activities and for development of airport infrastructure within Pakistan. CAA owns and operates all public airports of Pakistan with exception of Sialkot International Airport. Jinnah International Airport (JIAP) is the largest and busiest airport of Pakistan serving as the primary civil airport for the city of Karachi, the largest city of Pakistan and 12th largest in the world. Karachi Airport has a capacity of handling 30 aircraft at a time, has 16 passenger gates and a capacity of handling 12 million passengers annually. Being the largest aviation facility as well as the hub of aviation in Pakistan, Karachi Airport handled annual passenger traffic of 6.66 million and registered 48,073 aircraft movements in the year 2018-19 preceding COVID-19 pandemic.

Supply of Aviation Fuel at Karachi Airport is managed through Eastern Joint Hydrant Depot (EJHD). CAA through this expression of interest (EoI) invites applications from interested OMCs (firms/companies/Joint Ventures - JV/consortium) having prior experience, financial capacity and good reputation for pre-qualification in order to provide "Operation, Management and Maintenance of EJHD at JIAP - Karachi". In this regard, interested parties must possess relevant experience of operating an airport fuel farm and/or hydrant system at an international airport with adequate financial strength. Elaborate criteria will be included in tenders which will be called from pre-qualified parties. 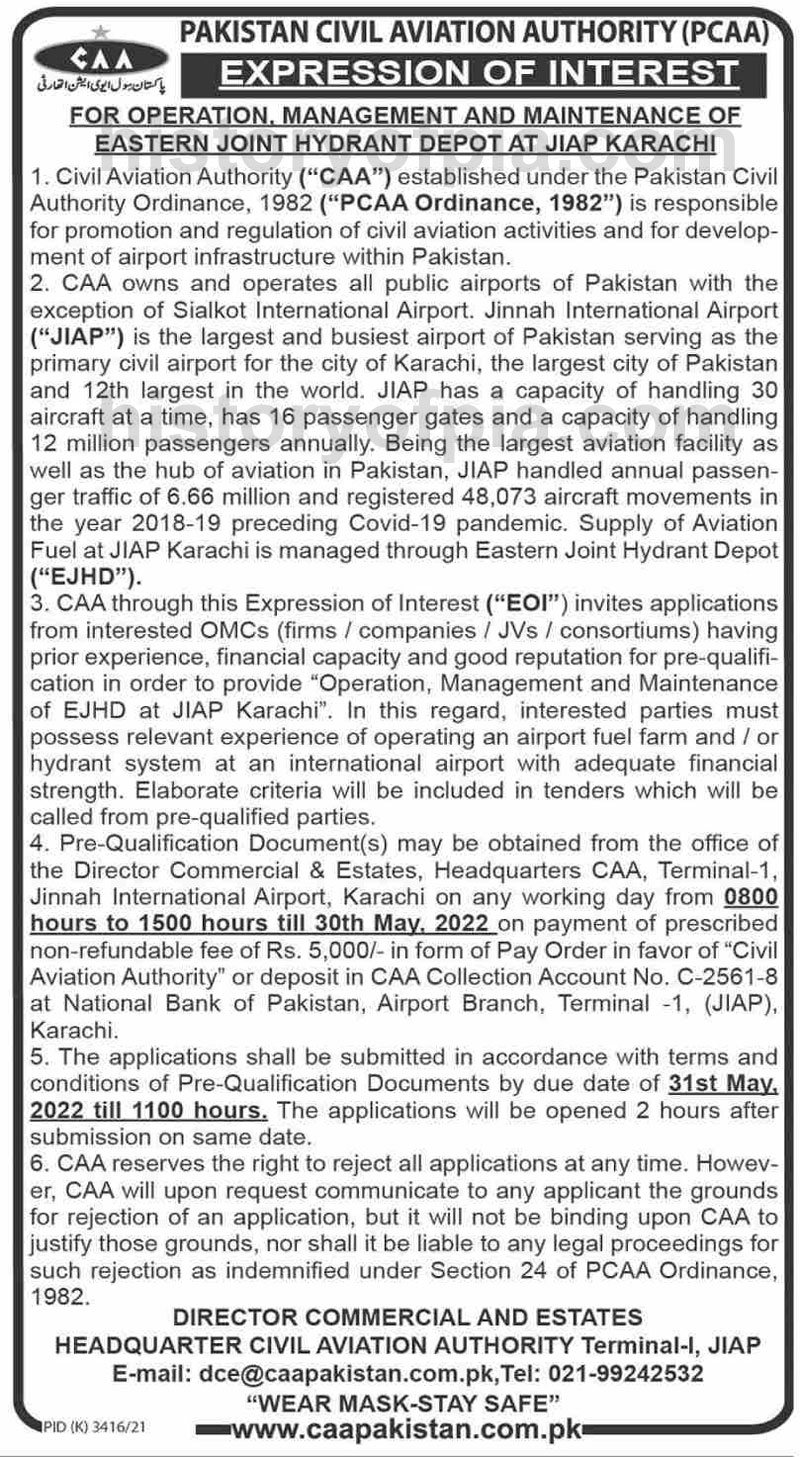 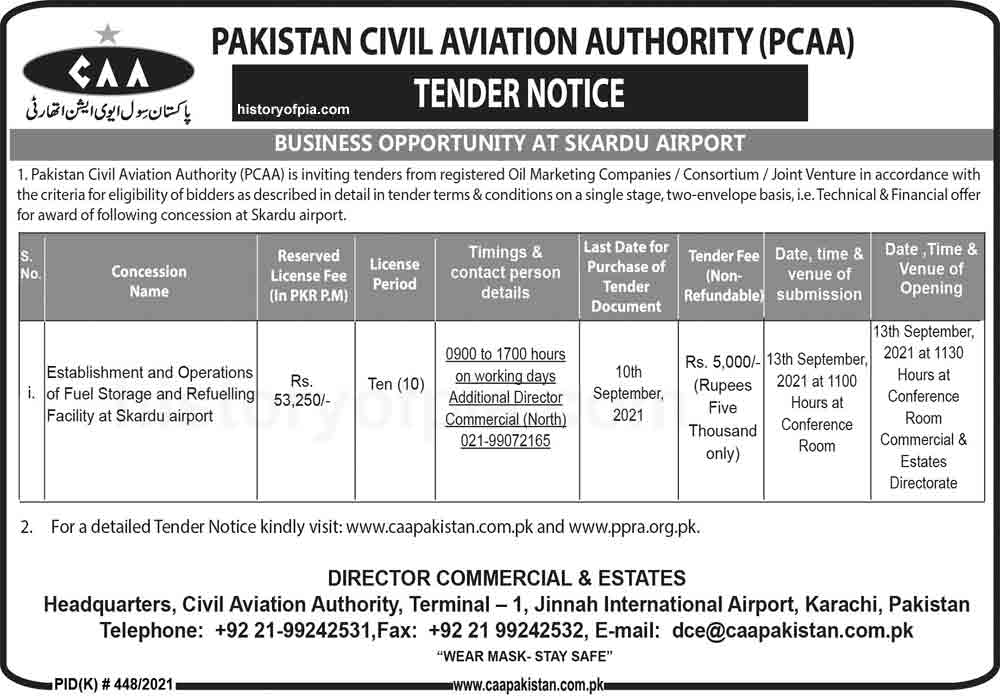 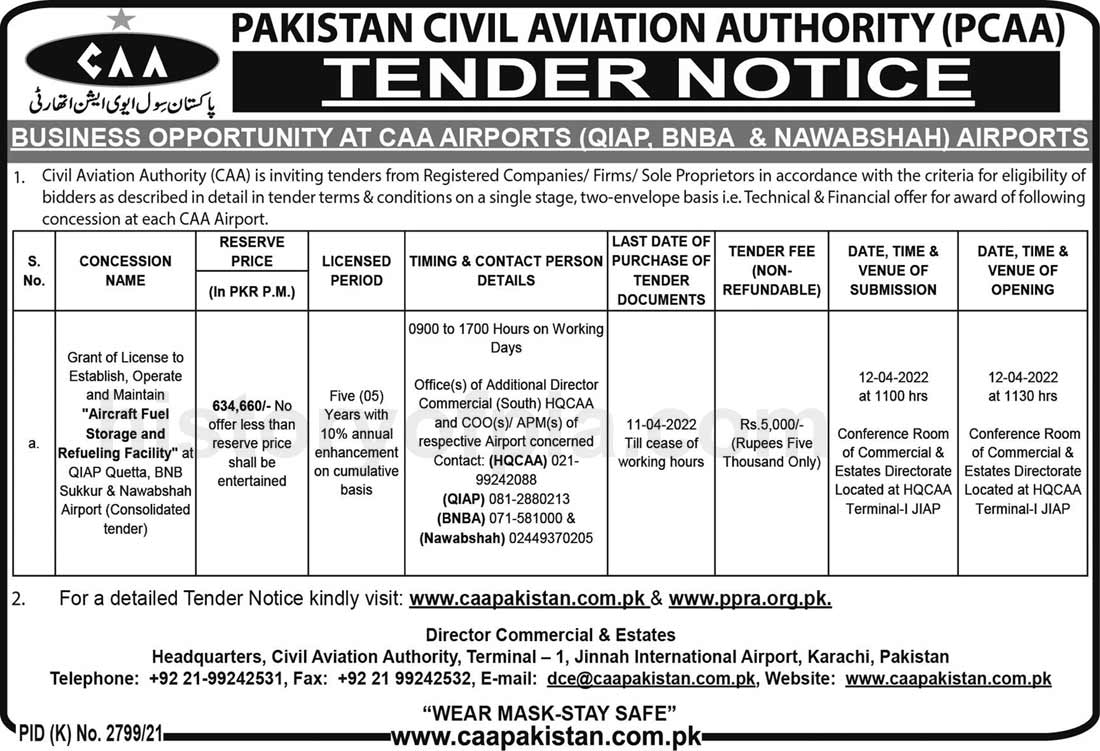