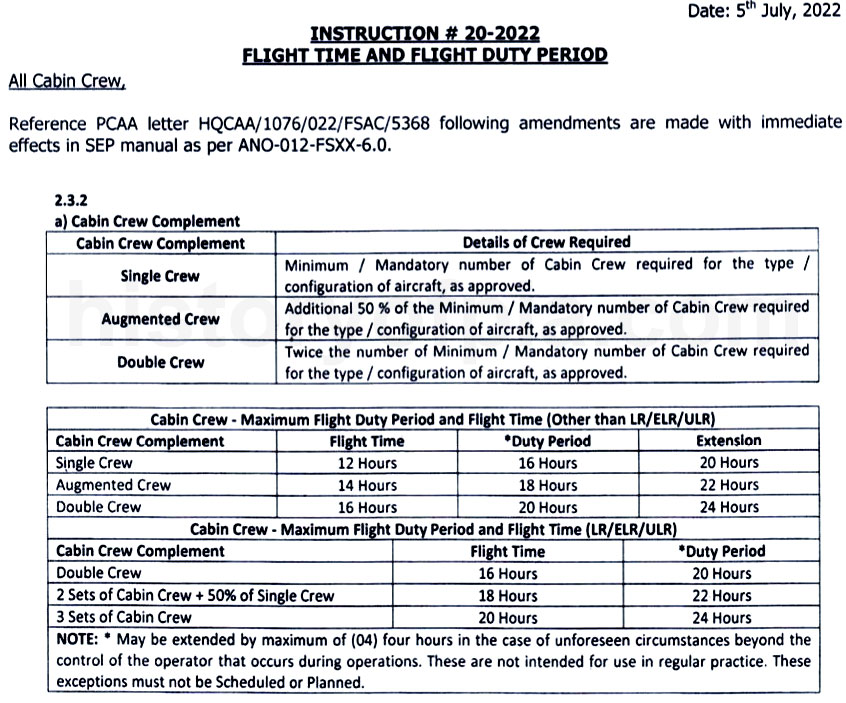 Pakistan Civil Aviation Authority (PCAA) has taken notice of amendment made by PIA in Cabin Crew Flight Time and Flight Duty Period circulated by the airline through a bulletin on July 5.

PCAA has directed PIA to withdraw bulletin circulated without prior approval of the amendment in airline's Operations/Safety Equipment & Procedures (SEP) Manual by PCAA. 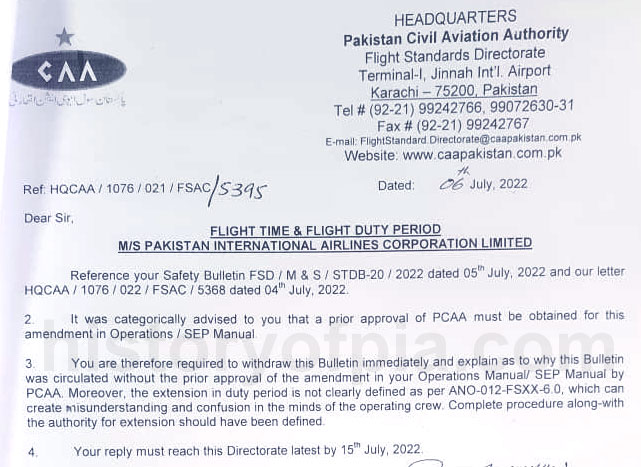 PIA has increased working hours of cabin crew from 14 hours to 16 hours.

At least five off days can be availed by the crew in a month and after six days of consecutive duty, and it is mandatory to provide a day off to a crew member at his/her home base after availing his/her rest period of last flight duty undertaken on sixth day and will consist of 24 hours. In case, a cabin crew being on a series of flight pattern, this seventh day off shall be afforded after the person returns to home base.

About stand-by period, the airline said that it is time period during which a cabin crew member is required to be available to receive an assignment for a specific duty without intervening rest period. Crew will be planned for the airport stand-by duty for six hours and home stand-by for 12 hours. It added that airport stand-by should be considered as part of a duty period.

Regarding basic duty on long range operations, it said the time limitation will be 16 hours, including two hours for briefing and de-briefing, and it could be extended up to 20 hours for planning purposes only on single sector long range flights. The airline added that rest requirement on long range flights shall be 24 hours, including one local night. At destination outside Pakistan, a minimum of 24 hours rest shall be provided whereas rest after return to base shall be 48 hours or double the duty whichever is more.

a spokesman for PIA said the increase in duty hours of the cabin crew had been made in the light of Pakistan Civil Aviation’s Air Navigation Orders (ANO) as other Pakistani airlines had been following the CAA rules.

He said it was only PIA which had been following its own rule of 14 hours’ duty for cabin crew. He, however, made it clear that the increase in duty timings would be only in case of flights’ delay.

“Only PIA adhered to its own guidelines requiring a 14-hour shift for the cabin crew, but the increase from 14 to 16 hours is only allowed for incidental or unforeseen delays,” the spokesman added.

He said the cabin crew would receive an incentive of Rs15,000 for a 16-hour shift. “This is in accordance with the CAA’s Air Navigation Order (ANO).”

The spokesman said it would also assist the airline in improving its reliability because PIA passengers had in the past experienced inconvenience owing to erratic work schedules of the members of cabin crew who refu­sed to complete their duty after 14 hours.