Pakistan International Airlines Corporation Limited (PIA), the national flag carrier of Pakistan, operates over a network spanning 23 countries across Asia, Europe and North America, and to 21 cities within Pakistan.

PIA seeks to hire services of a reputable international Consultancy Firm with extensive aviation consulting experience to prepare a Five-Year Corporate Business Plan. The objective is to make PIA a leading international airline that is sustainable, profitable and plays an important role in Pakistan's economy. 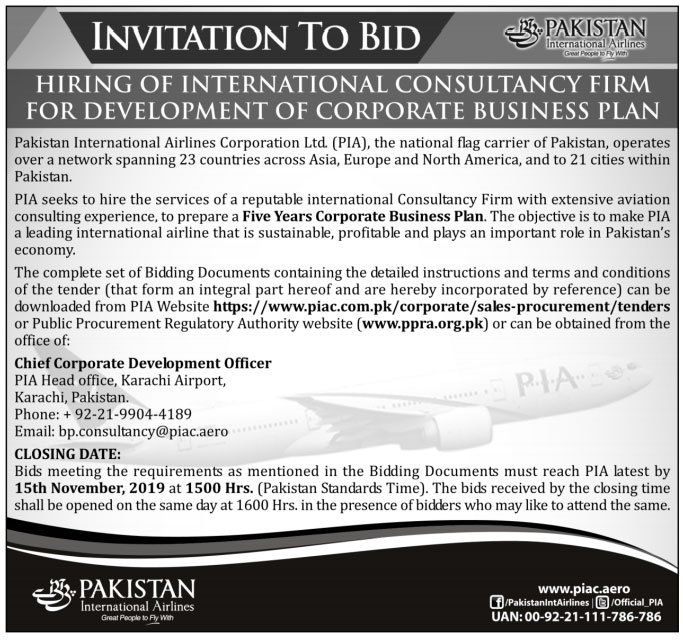 Pakistan International Airlines Corporation Ltd. (PIA), the national flag carrier of Pakistan, operates over a network spanning 23 countries across Asia, Europe and North America, and to 21 cities within Pakistan.

PIA seeks to hire the services of a reputable international consultancy firm (Consultant), with extensive aviation consulting experience, to prepare a Five Years Corporate Business Plan. This should be developed, keeping in view, amongst other factors, the historical trends, current market state, present demand, current challenges, business analysis and forecast for future market environment. The objective is to make PIA a leading international airline that is sustainable, profitable and plays an important role in Pakistan’s economy.

The Corporate Business Plan will include all proposed initiatives & strategies including organizational & financial restructuring along with relevant time-lines for.

The plan should provide a detailed forecast of financial position, performance & cash flows under different possible/recommended scenarios. It shall also include recommendations on revised capital structure along with a viable working plan for raising future funding requirements.

Proposed Business Plan should give holistic view of PIA’s current competitive position in the industry focusing on its Sales and Marketing Strategy for each region, route & destination. The Plan should also propose the restructuring options advising on best possible strategy for each area of
the airline.

PIA will support the Consultant by providing available operational and/ or financial information required for the development of the Corporate Business Plan.

That's good news as long as PIA ensures this tender is communicated widely enough so that they receive bids from top international consultancies that have specialism in aviation. The last thing PIA needs it more people that don't understand the industry.

Lufthansa Consulting and Sabre come to mind as do McKinsey and Boston Consulting Group. That said, this sort of expertise certainly doesn't come cheap so if they are hired, I hope the management actually implements the recommendations even if politically uncomfortable
Top

There is neither an inclination nor the will to take the bitter pill and address the basic issue of unnecessary personnel whose salaries and benefits are hemorrhaging the airline's accounts for years. Unless this is done nothing will change. Earning 100 rupees and expenses 200 rupees-its that simple. 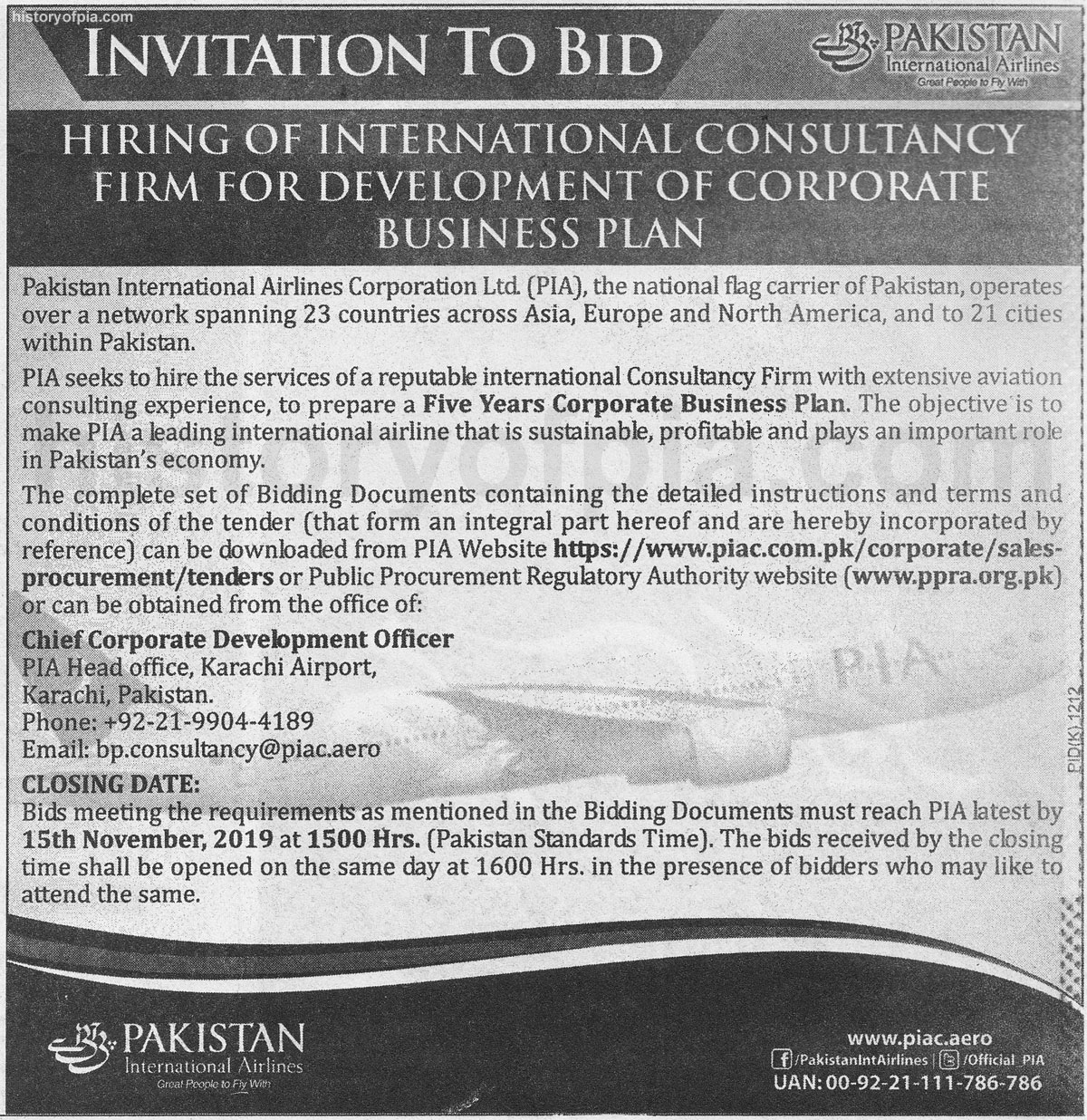 Bids submission date extended to December 2, 2019, according to following corrigendum in November 9 newspaper: 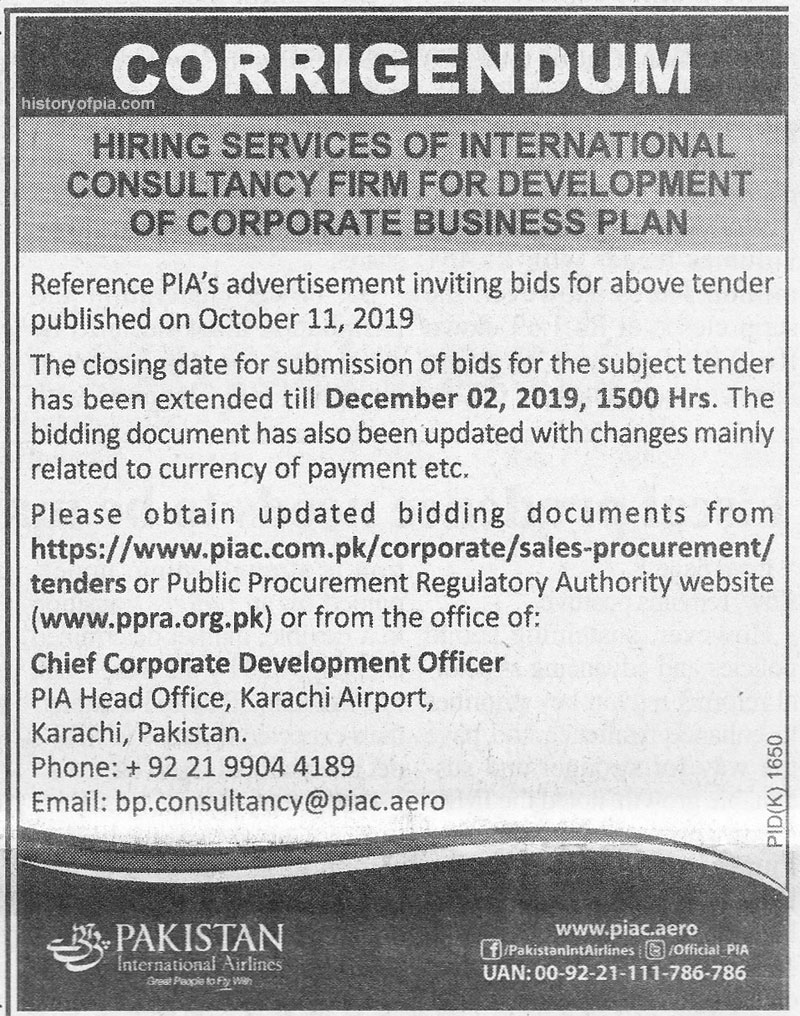 The objective is to make PIA a leading international airline that is sustainable, profitable and plays an important role in the economy. A number of consultancy firms have shown interest in the bidding process completed last month, sources said.

An official said if non-core staff from engineering, catering and ground handling crew were separated from core employees, the ratio of workers per aircraft would decrease to 135, which would be similar to what is in India. PIA has been suffering from overstaffing and employs 13,500 regular employees, 3,500 daily wagers and the ratio of workers per aircraft stands at 450, Senate Standing Committee on Aviation was informed last month.

The losses have been aggravated by a fuel price hike and rupee depreciation of more than 20 percent within a year, the official said.

The previous government's attempt to privatise the national carrier stalled in 2016 after staff protests disrupted operations and parliament passed a law that effectively made privatization possible.

The PTI government is yet to decide whether to place PIA on its active privatisation list with financial losses rising to Rs 425 billion since 2008.

A senior member of the Privatisation Commission told Business Recorder that the government has no plans to privatise PIA in near future and an improvement plan is being prepared to make the national carrier ‘stand on its feet.'

Currently, PIA is under the administrative control of the Aviation Division, which indicates an attempt to delist it from entities to be privatised, as under privatisation law if an entity is to be privatised then it has to be placed under the administrative control of the Privatisation Commission, an official of the Commission said.

The privatisation of PIA was approved to be delisted from the active list by Cabinet Committee on Privatisation (CCoP) on October 30, 2018 and at the same time the strategic sale of PIA Roosevelt Hotel, New York, and Scribe Hotel, Paris, within the next three years was approved.

The official maintained that PIA has to pay up to Rs 2 billion markup per month on loans; and added that PIA is working towards partly returning payables to Civil Aviation Authority, Federal Board of Revenue and Pakistan Stock Exchange, etc.

My experience with Govt. related departments and non-governmental (non-profit) entities is that such "consultants" are simply hired to 1. Please someone who owns the consultant firm (in return for rewards), 2. Dictate what you want but through someone else's mouth, and 3. get your perks/privileges adjusted "according to international practice" while increasing workload and reducing privileges of the working class as "cost-saving measures".

I have, during my job experience, seen 5-6 such consultants being hired for business plans. Not one has ever succeeded beyond what I just wrote.
Top

No decision made on PIA: PC official

The work relating to restructuring, special audit and strategic business plan in Pakistan International Airline (PIA) is delayed as its chief executive officer (CEO) has been barred from discharging his duties as CEO by a court of law. This was stated during a meeting of the National Assembly's Standing Committee on Privatisation on Wednesday.

Syed Mustafa Mahmud belonging to the Pakistan People's Party (PPP) chaired the meeting. An official of the Privatisation Commission (PC) informed the committee that no decision had been made on the PIA, and the Prime Minister's Task Force on PIA was given a mandate to devise a plan for the national flag carrier.

The committee was further informed that the PIA's board in September 2019 approved hiring of an international consultant within six months for a comprehensive strategic business plan for the revival of the airlines, in line with the decision of Prime Minister's Advisor to Finance Dr Hafeez Sheikh.

An official of the Aviation Division, Tariq Bukshi informed the committee that PIA's board has been given a free hand to improve the performance of the entity.