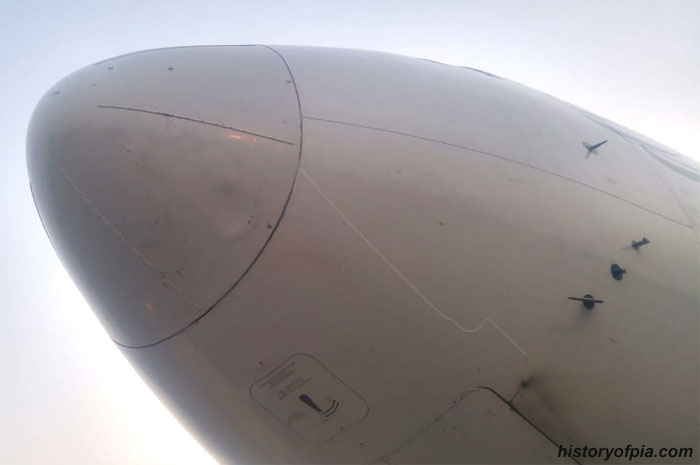 According to news sources, today PIA Boeing 777-300ER (registration AP-BHW) performing post-Hajj flight PK3556 from Medina arrived at Peshawar Airport with bird hit on radome. The B777 landed in Peshawar at 3:41 PM.

The incident has delayed departure of PIA Karachi to Lahore flight PK306 which was scheduled to depart from Karachi at 7:00 PM.

It's unclear whether the aircraft suffered bird hit when it departed from Medina or during landing approach to Peshawar.

PIA Boeing 777-300ER registration AP-BHW departed from Karachi at 12:44 AM on September 12 as flight PK306 to Lahore with a delay of more than five hours. The flight was scheduled to depart at 7:00 PM on September 11.

PESHAWAR: Meat shops and garbage piles around Bacha Khan International Airport - Peshawar has irked the airport management since bird-hit incidents are increasingly reported by international airlines operating from the facility.

Civil Aviation Authority received five complaints during the last 25 days of similar incidents asking upon the concerned officials to take action since such incidents could prove fatal for not only commercial flights but the military at the same time.

CAA officials informed that the district administration was supposed to take action however the CAA also held several meetings besides awareness sessions and distributing pamphlets among meat shop owners and local residents.

Officials stated that despite having been brought into the notice of district administration, the issue could not be resolved.

They said that CAA has been trying to manage things but the district administration was supposed to maintain a smooth flow of air traffic, should take serious action.

A privately-owned company has been warned over dumping food items on Peshawar Airport apron.