Some photos and report from my recent journey on PK788 to Karachi.

I arrived at Heathrow about 2:20 minutes before departure at 17:45. I bought my ticket from PIA and also booked my seat 33L online.
There was no queue and I checked in swiftly. The boarding gate was announced at 16:15 and boarding started soon after. It was going to be a full flight. The aircraft was 777-200er AP-BHX arrived earlier as PK785 from ISB. 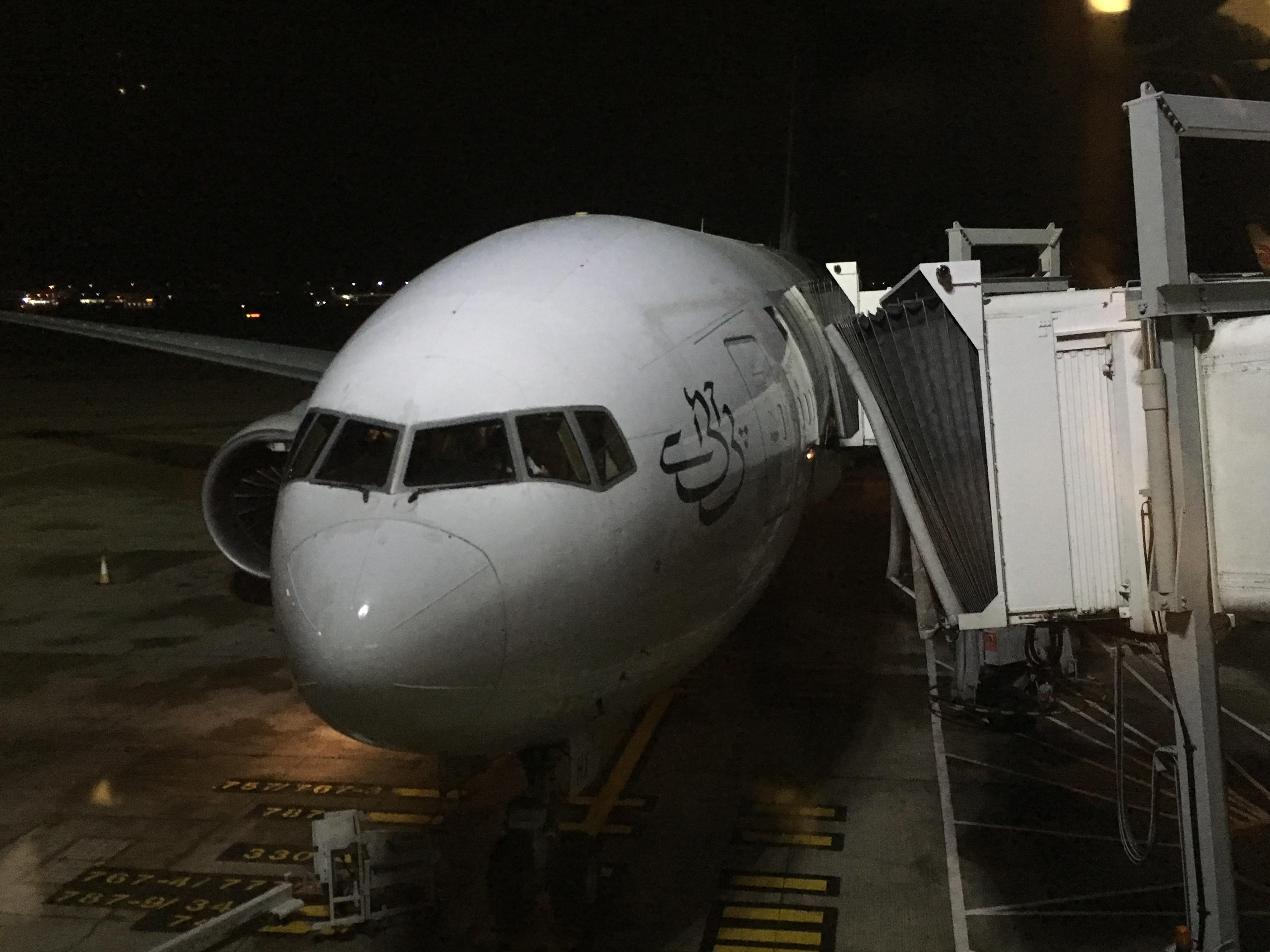 I was greeted and directed to my seat by a young stewardess who did not seem too cheerful. The heating in the plane was on at full blast it seemed and the heat hit the boarding passengers. Music was playing softly in the background, however the passengers were quite loud and drowned out the music quite effectively. The aircraft had a smell , a ‘sick’ smell which dissipated after the air conditioning took full effect later during the taxi. 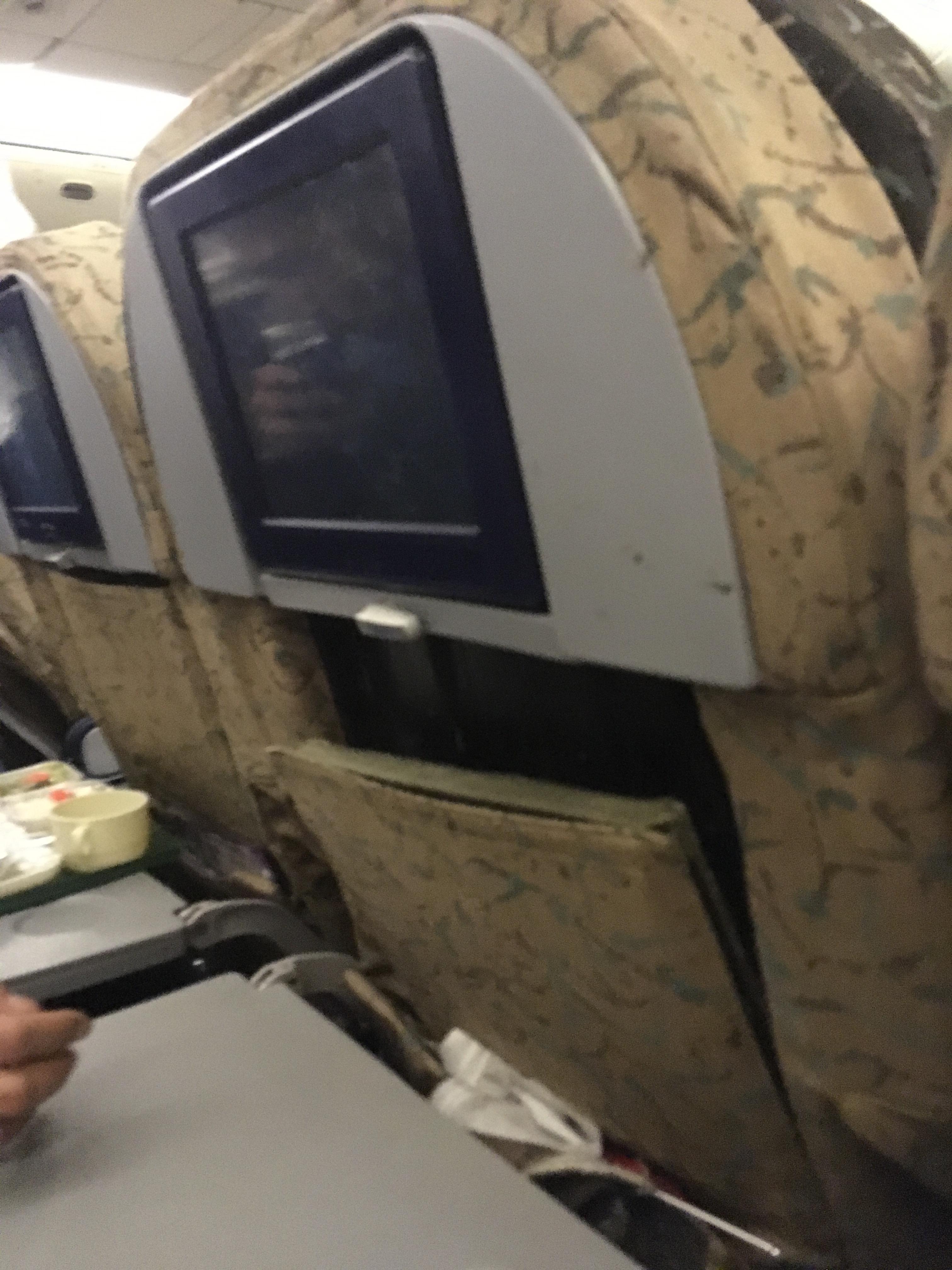 I was disappointed to find my window seat 33L did not have a window to look out from and I would only have a partial view from a window just behind me. IFE on my very scratched screen was, as expected, showing route map and I was grateful for that blessing. The remote control was out of order. My neighbours control was working( there was something else playing on his screen for s minute), however the 2 year old was more interested in seeing how quickly he can smash the control and the whole seat in front of him to pieces. The cabin remained warm until after dinner. Most passengers were with kids or elderly. I was surprised to see a few westerners as well. 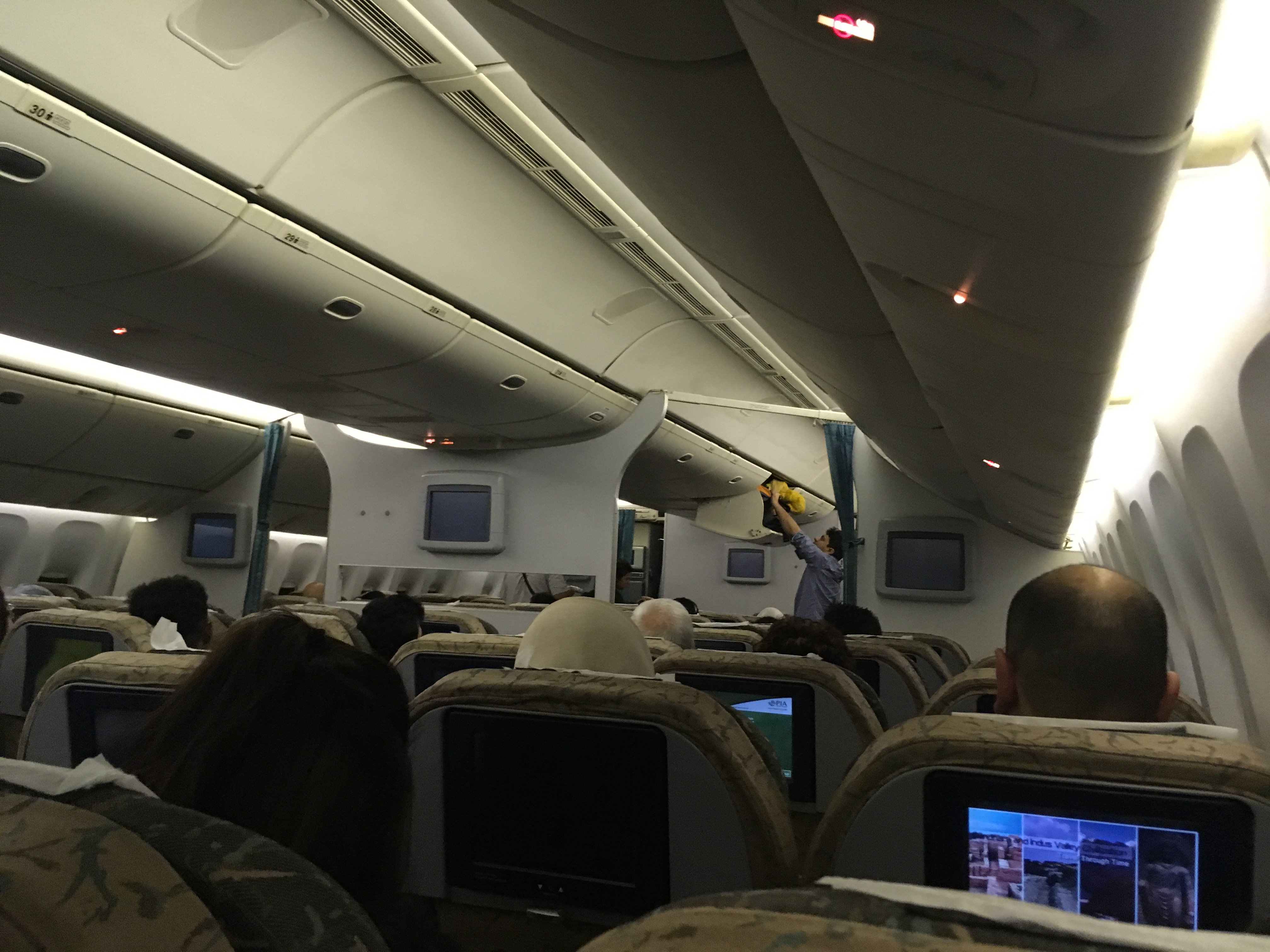 After about an hour after take off dinner was served. Chicken Khorma, daal and rice with peas. Quite nice . Dessert was a very creamy cake. Tea served later. 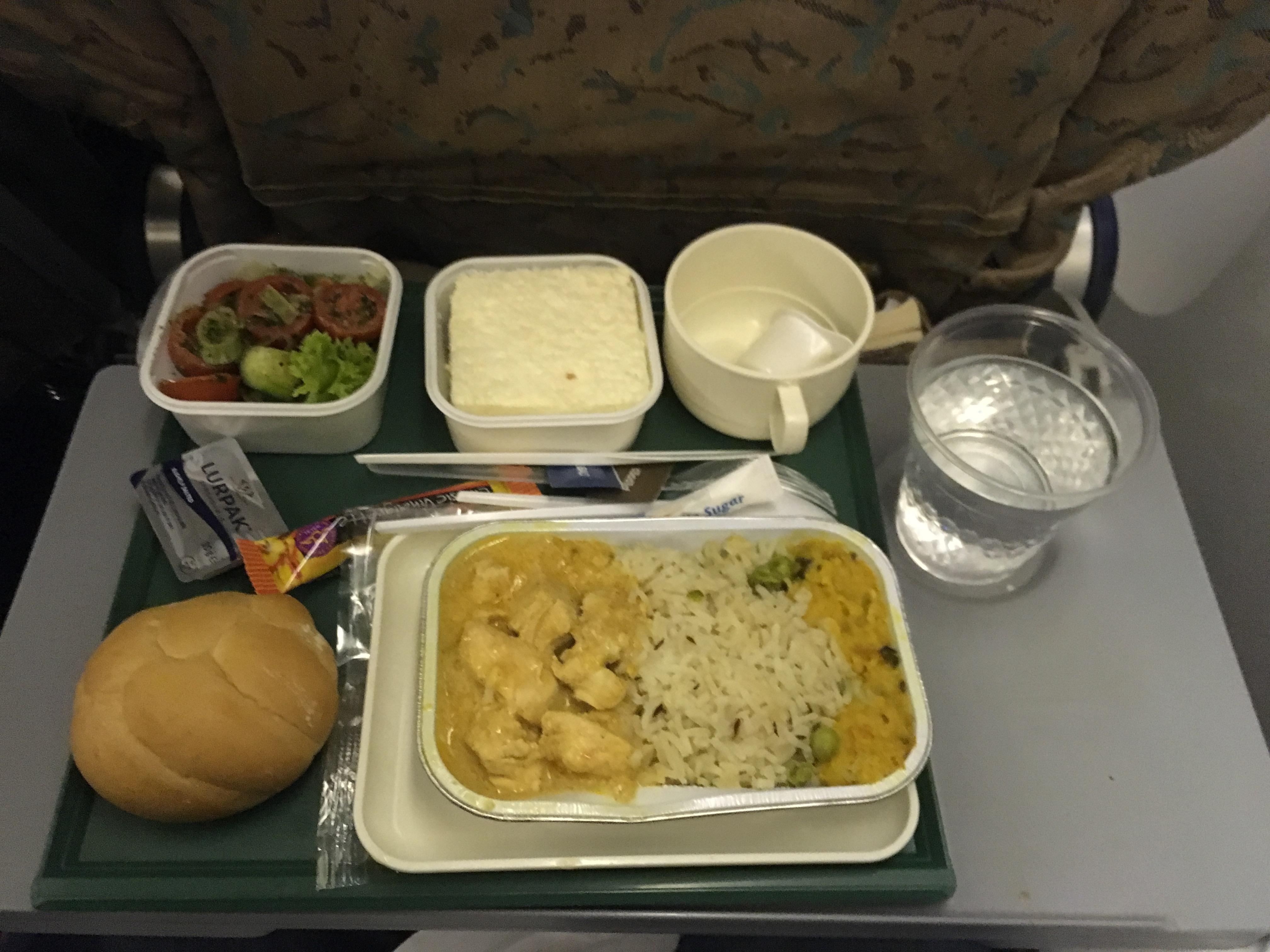 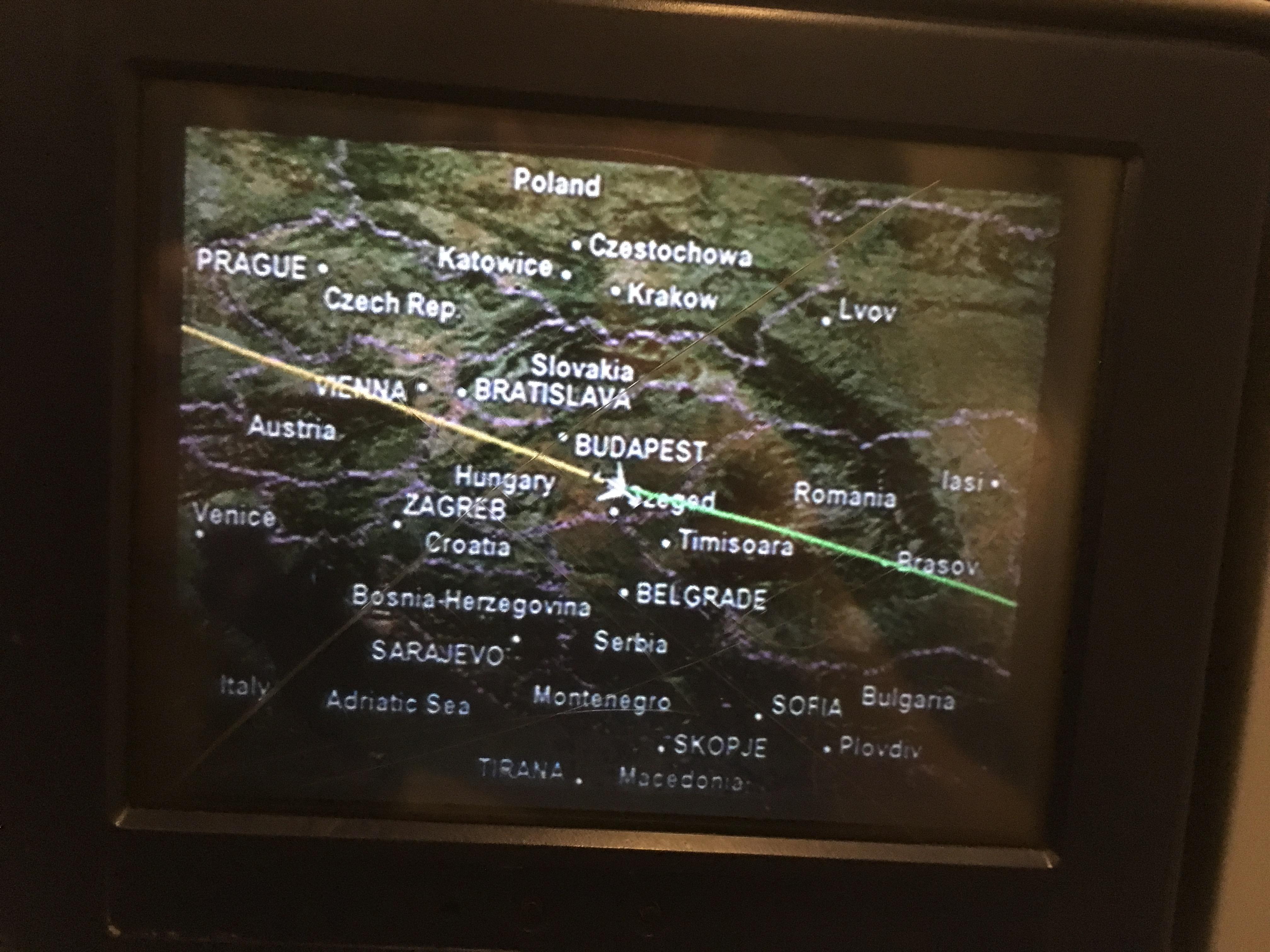 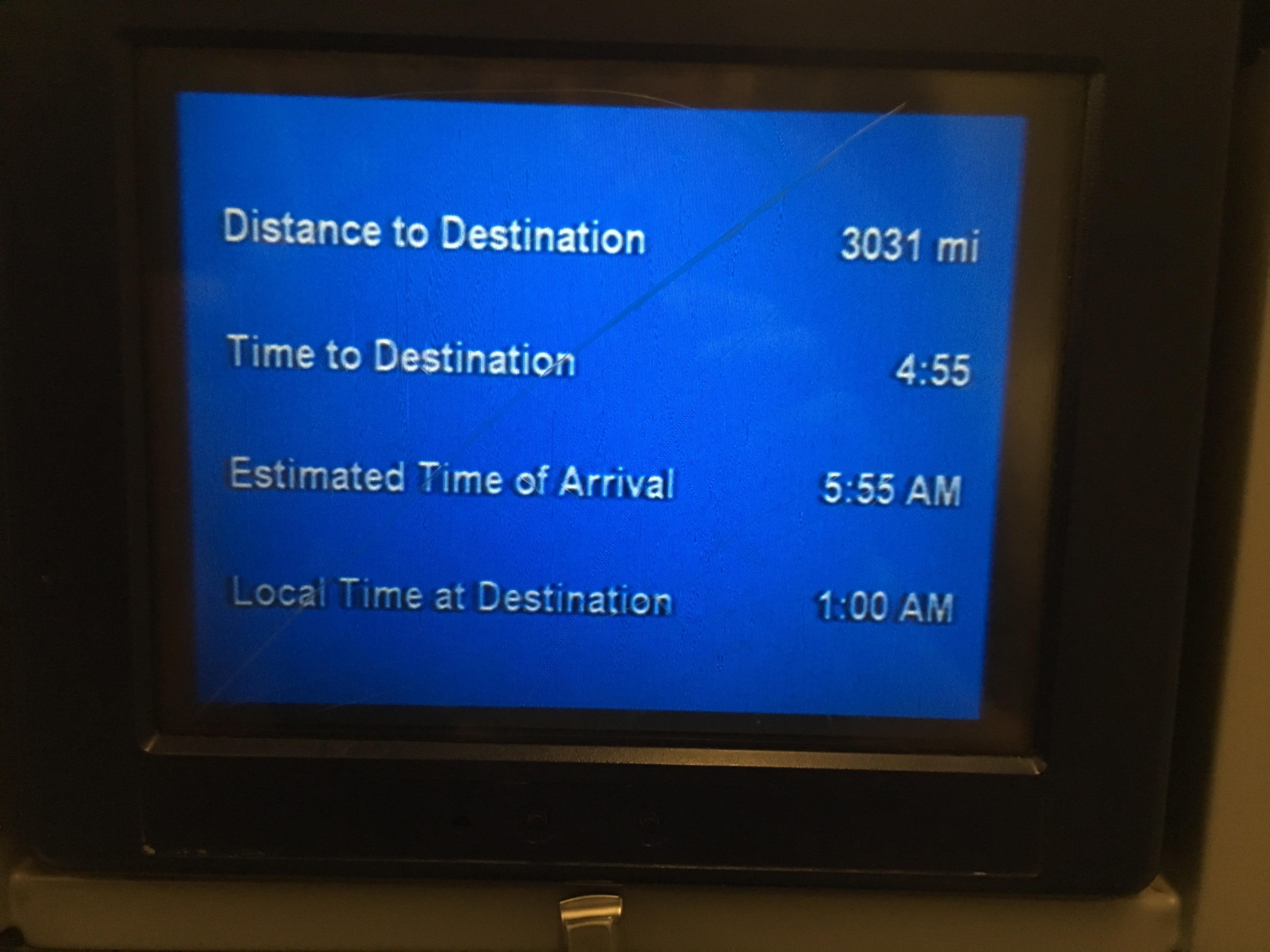 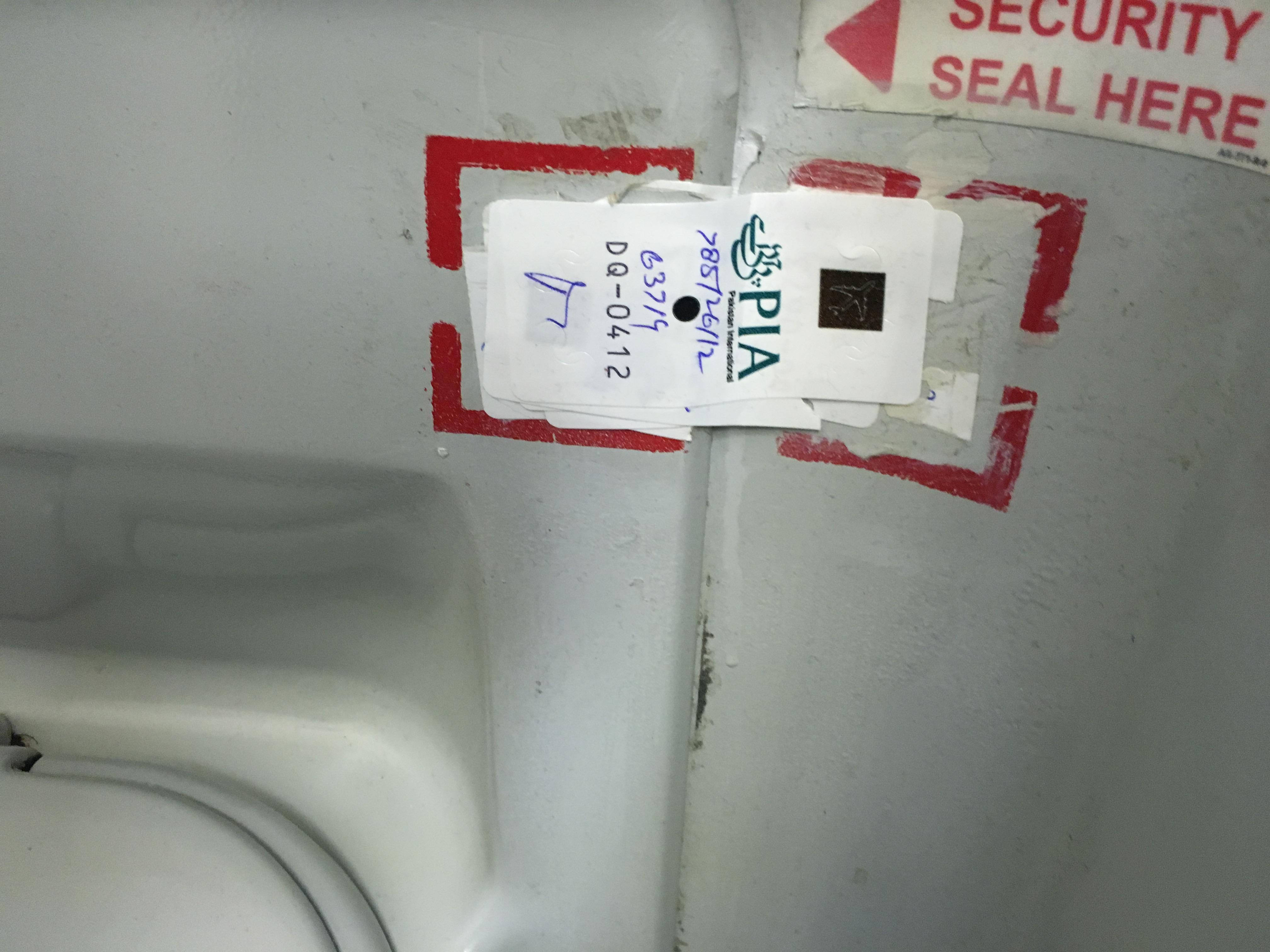 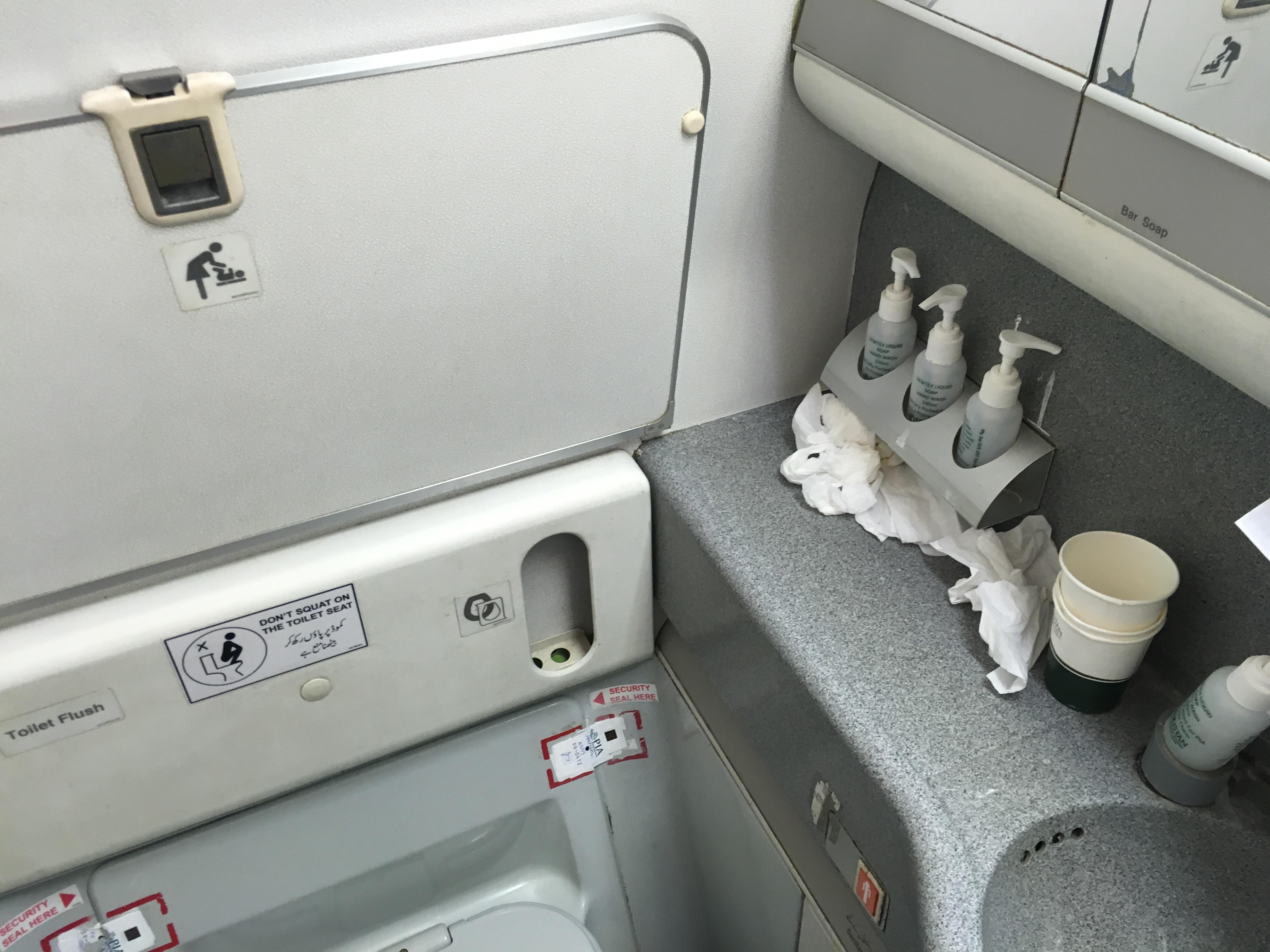 After a few hours the toilet was not as messy as I expected. 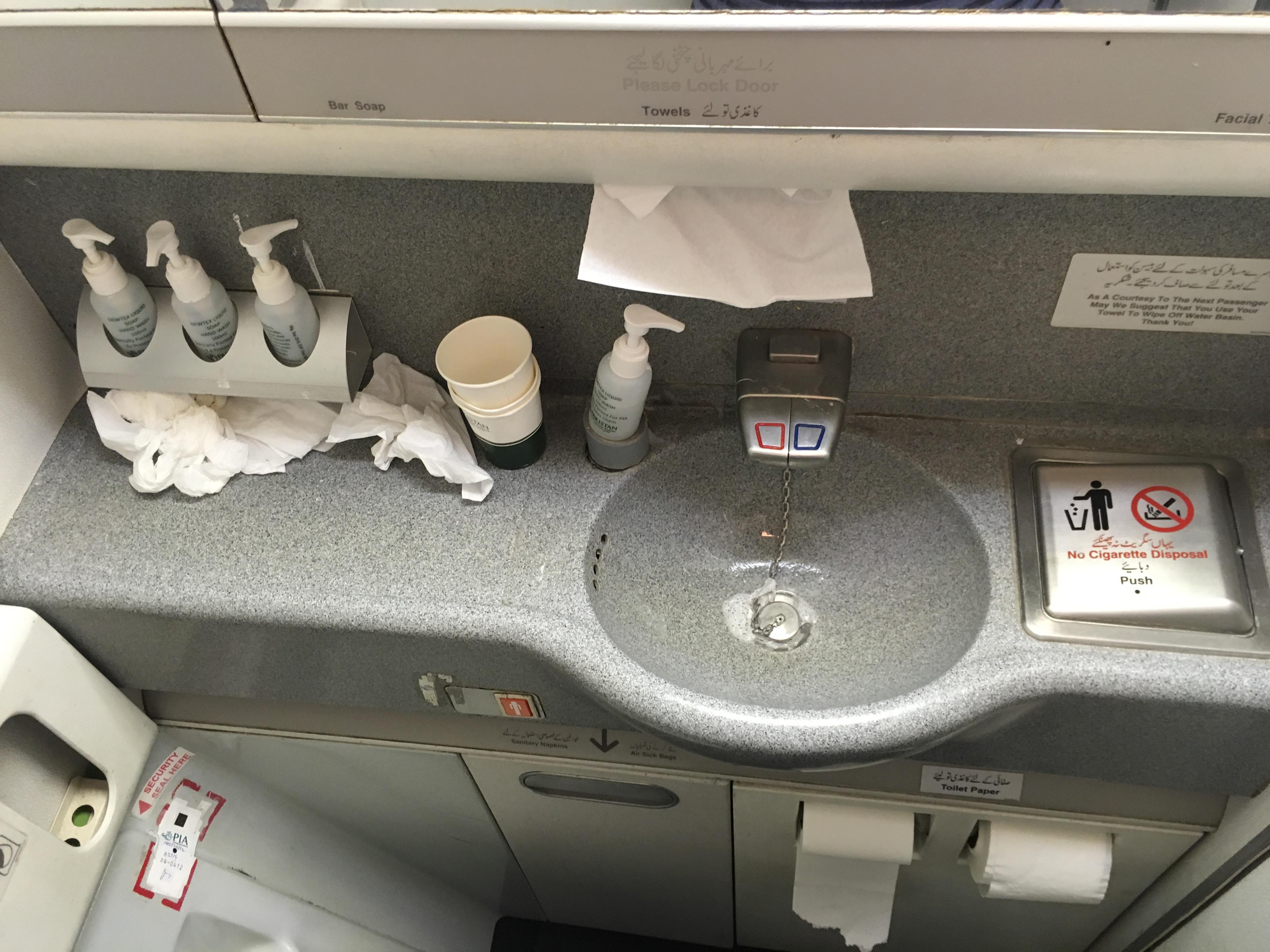 After dinner I realised that I nor anyone else could control the individual overhead lights. The whole aircraft was suddenly plunged into darkness for a few hours and it seemed that someone in control wanted us all to sleep. I could not even see the floor lights to the emergency exits. People used their mobile phone to find their way or get to their belongings in the overhead bins.

About 2 hours before landing lights were switched on suddenly.No mood lighting used, just brutally and suddenly turned on telling everyone to ‘wake up, it’s time for breakfast’. Breakfast was a croissant, jam, lemon cake, strawberry yogurt and tea. 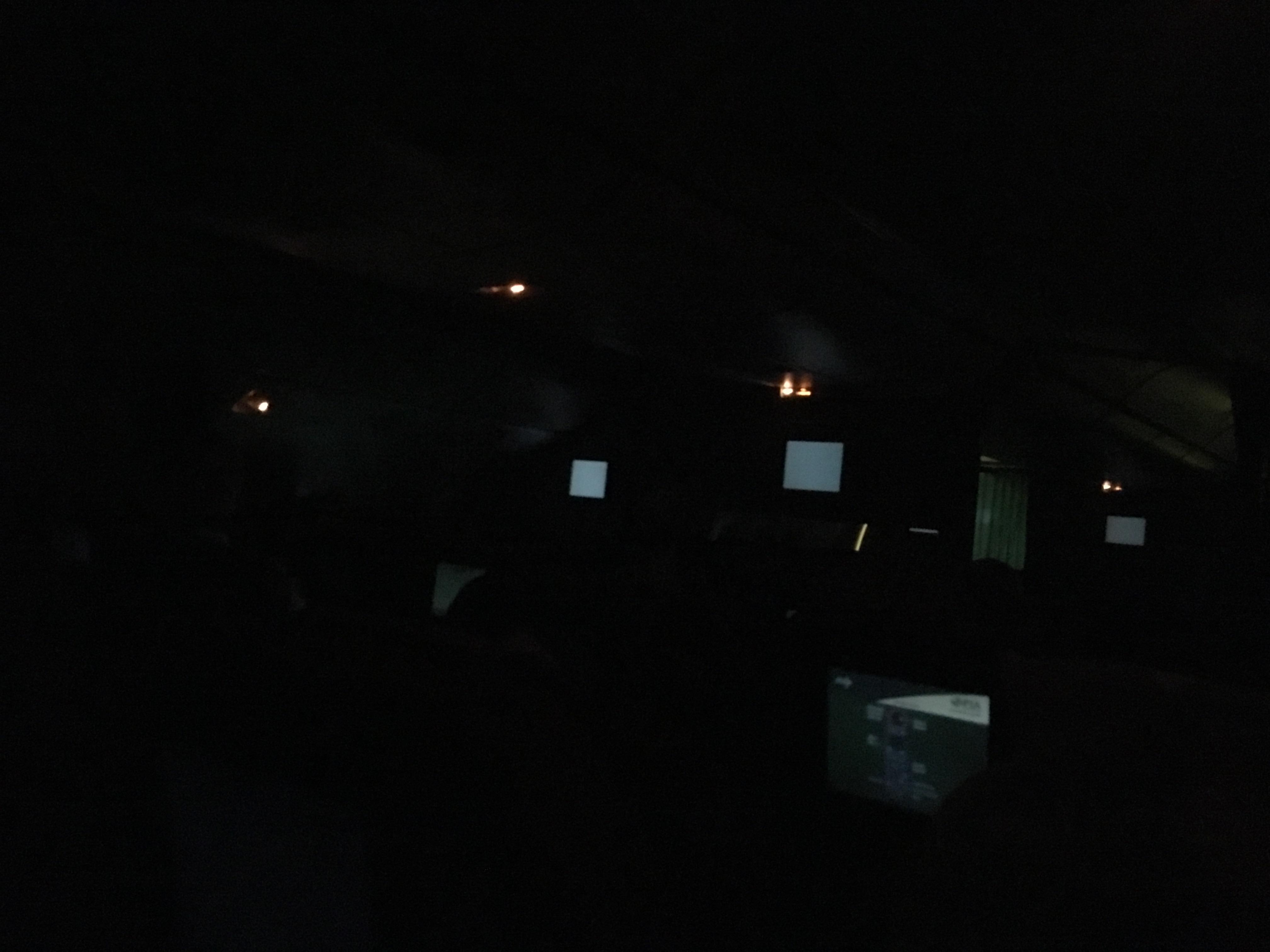 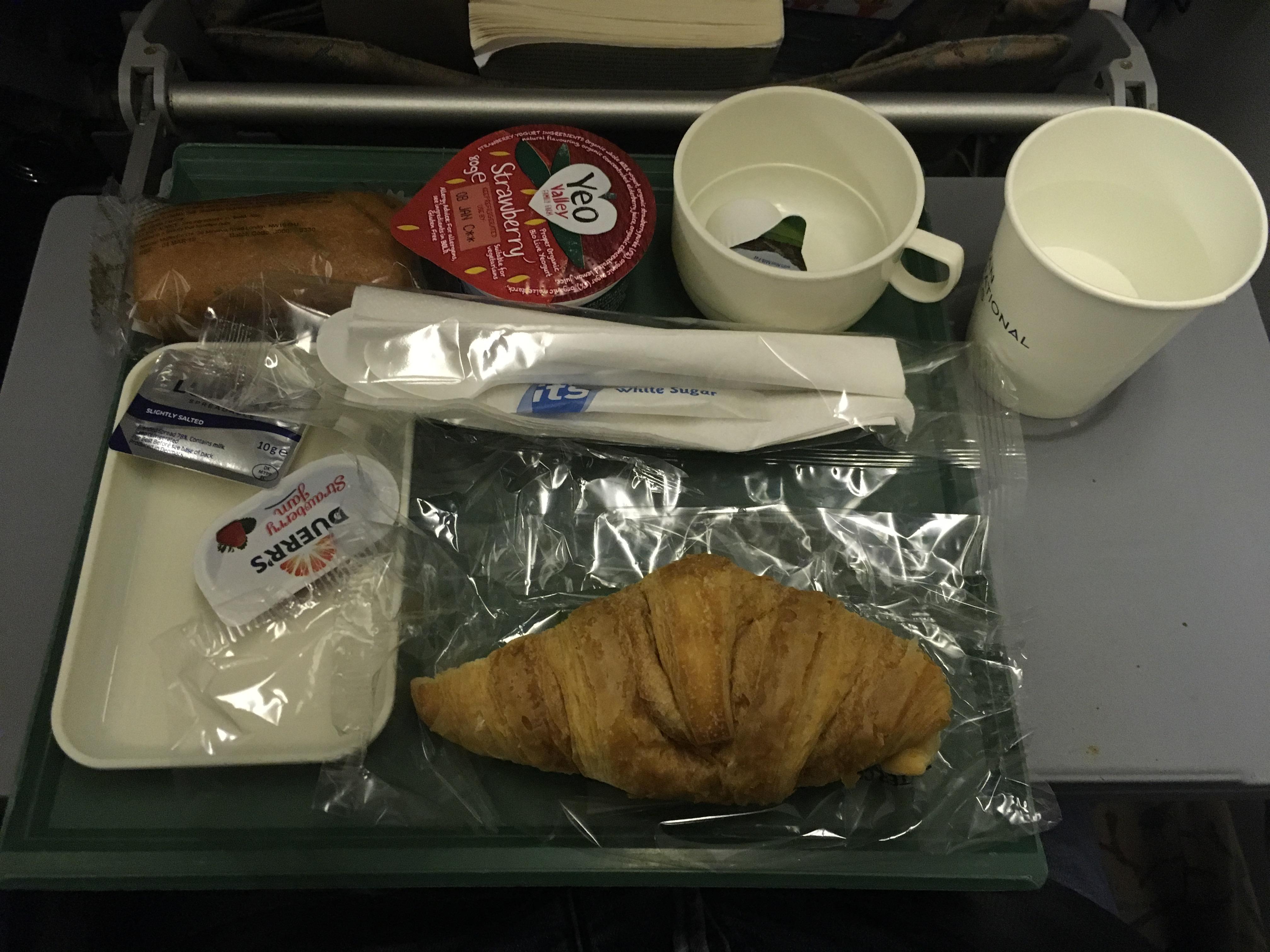 Were started descending from 37000 ft soon after entering Pakistan Baluchistan from Iran and landed at KHI 6 hours 50 min after leaving LHR.
KHI immigration was very busy with a Turkish A333 and an Emirates 773 at the terminal. Took about 50 minutes to cross immigrations. By this time my luggage had arrived and taken off luggage belt.

Overall, happy about being a quick direct and an on-time flight, but disappointed about the state of the aircraft and the lack of service with a smile.
Top
Top

Thank you Zulfiqar for sharing.

Thank you for this detailed trip report. Is the online seat booking facility available on the new PIA website?
Nothing is constant except change
Top

Thanks for all the nice comments.
Yes I booked seats online under My Booking. After entering PNR and surname on their website a security code is sent to your email address. You can use it to access seat selection.You may need an up to date browser for it.
Top

Thank you for your trip reports.
Abrar Din Hussain
Top
6 posts • Page 1 of 1