Buses for the project to arrive in Pakistan soon.

According to news reports:

More than 90% work on metro bus stations and track between Islamabad Airport and Peshawar Morr complete. Service to start after the delivery of buses.

It will be economical and affordable mode of transportation for general public and also airport workers traveling to/from Islamabad Airport compared to exorbitant rates charged by taxis/cabs.

One question about this service.

On Lahore Red line (bus metro), staff do not allow passengers to take large bags or luggage in the bus due to capacity and security reasons. only small shopping bags or shoulder/school bags are permitted.

To get most benefit and reduction in road congestion, will passengers be allowed to take luggage on to the ISL metro? If luggage is not allowed then this will limit the usefulness for travelling passengers. As an option, maybe a special Airport Express service can be run on this line (maybe every 15-20 minutes with pre booked seats that allows luggage to be taken.

There are significant challenges getting into and out of airports due to rush in parking not to mention extra costs of taxis for frequent travellers and meet and greet drivers.
Top

The buses used for ISB airport must be + should be airport shuttle buses which have space for bags of passengers as one might have seen at various airports around the world. If by mistake they provide normal city transport buses it will be a big blunder .
Top

According to news reports:

Preparations are in full swing to launch metro bus service between Islamabad Airport and Peshawar Morr on Pakistan Day - March 23, 2022.

27 kilometers long Metro Bus service between Islamabad International Airport and Peshawar Morr to be launched on March 23 with 30 buses.

Fare will be PKR 30 per passenger.

Shuttle bus service will be available between Peshawar Morr and three points in Islamabad.

CDA has placed orders with an international company which will deliver buses in March.

The automated security and command and control system for ticketing will be made operational after six months.

CDA will soon open bids for awarding contract for security and IT systems.

Cab or minivan from Rawalpindi to Islamabad Airport charges PKR 2,000 to PKR 2,500 but this rate goes up for night time and early morning commuters who have to pay between PKR 5,000 to PKR 8,000.

Citizens' plight would come to an end in March with the launch of metro bus service between Peshawar Morr and Islamabad Airport. 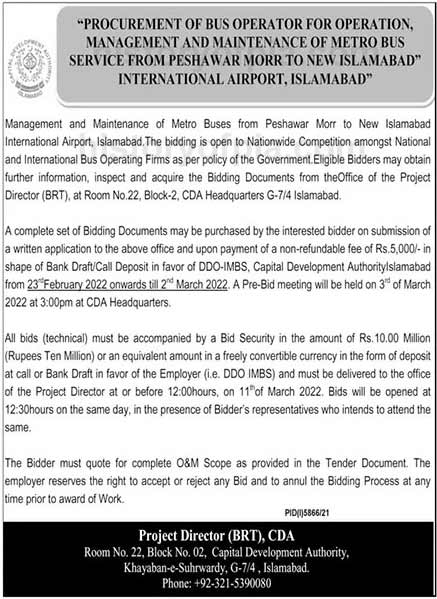 24 buses will run from Peshawar Mor to the Islamabad Bus Terminal N5 Peshawar Grand Trunk (GT) Road, and six buses with extra luggage storage will run round the clock uninterruptedly from N5 to the airport.

CDA has ordered 30 buses from a Chinese bus manufacturer, 15 of which are set to be shipped to Pakistan and the remaining 15 are in the final phase of manufacturing.

To prevent more delays, the National Highway Authority (NHA) will conduct pre-shipment inspections of the available buses via third parties because of Chinese COVID-19 restrictions. The orange, 12-meter-long buses are due to arrive in Pakistan in April, after which the CDA will road test them with manual ticketing because of the delayed installment of the automated systems.

Currently, there is no public bus service to the airport which is 32 km away from Zero Point.

Capital Development Authority (CDA) took over the metro bus project in March last year from the National Highway Authority (NHA) on the direction of the federal government and started the process to procure buses.

Metro bus service between Peshawar Mor and Islamabad International Airport now likely to start in April. The inauguration has been delayed due to delay in the manufacturing of ordered buses due to COVID-19 pandemic.

CDA, after a competitive process, had placed the order for procuring 30 buses with the Higer Bus Company a few months ago.

The ship with buses will start its journey to Karachi from China on March 15. Ship expected to arrive at Karachi Port by the end of March.

24 buses would be operated from Peshawar Mor to N5 bus station near Grand Trunk (GT) Road while six others, having extra space for luggage, would run from N5 to the airport round the clock.

Under a new plan some of the buses will be plying on Islamabad Expressway to provide relief to commuters.

Corridors and stations of the metro track have already been constructed and now command and control, ticketing, station management, cleanliness and security systems are being completed.

Buses will be shipped to Pakistan on March 15 and reach Pakistan in 20 days.

Trials metro bus service will begin in the first week of April.

Date extended to March 15 for the procurement of bus operator for operation, management and maintenance of metro bus service from Peshawar Morr to new Islamabad International Airport - Islamabad. 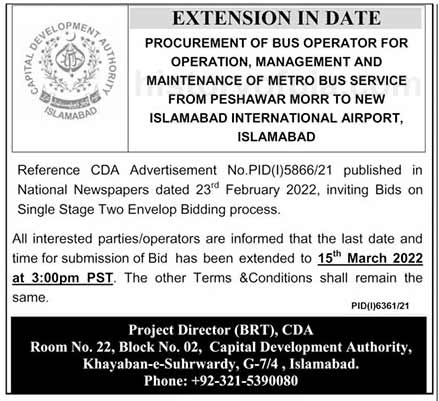