Today, PIA Boeing 777-200LR registration AP-BGY performing Riyadh to Peshawar flight PK728 diverted to Islamabad for some reason. The aircraft apparently around 3:34 PM was descending for landing at Peshawar before diverting to Islamabad where it landed at 3:54 PM. 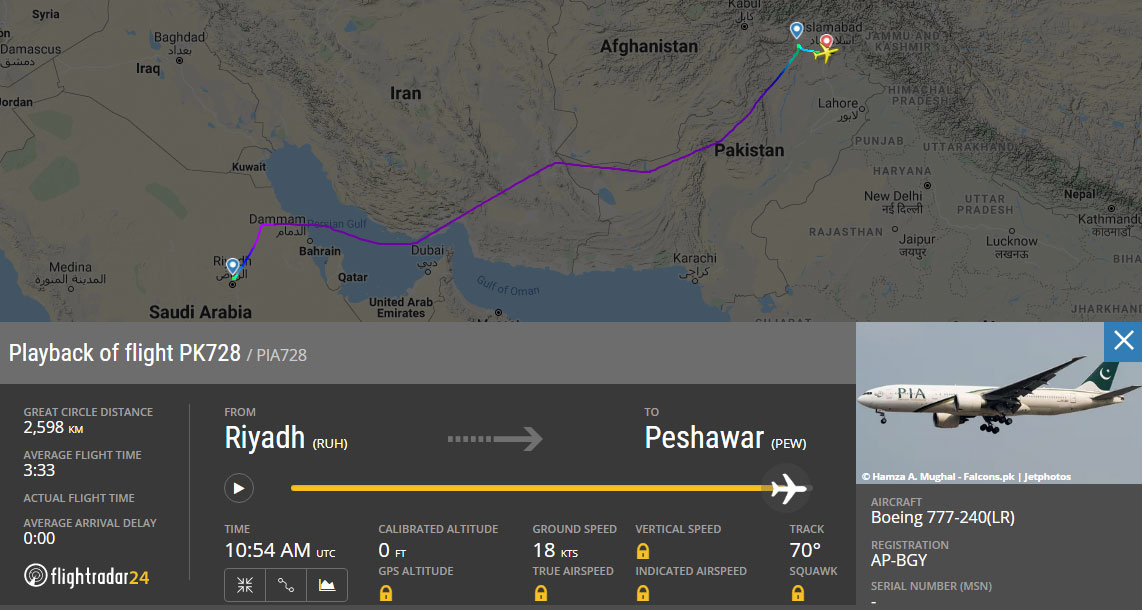 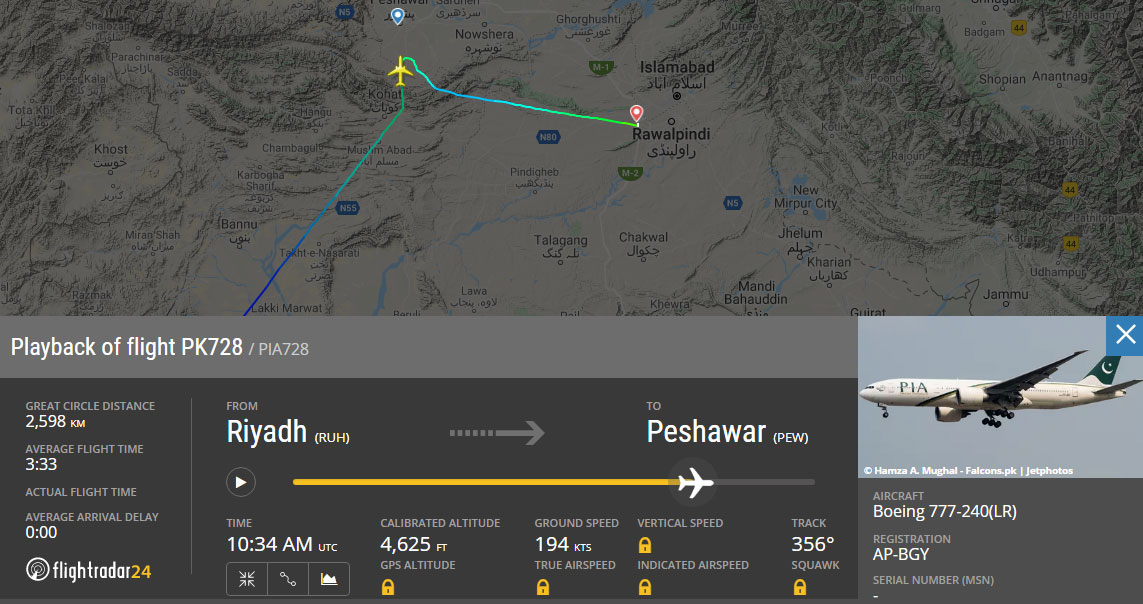 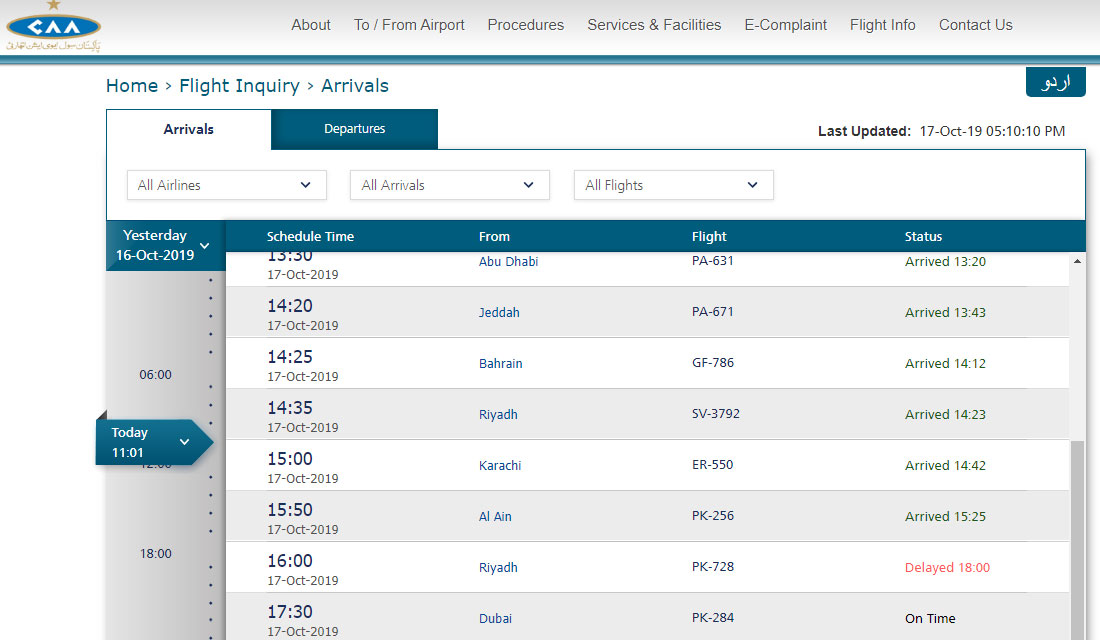 PIA Airbus A320 registration AP-BLA performing Dubai to Peshawar flight PK284 diverted to Islamabad where it landed at 5:14 PM. 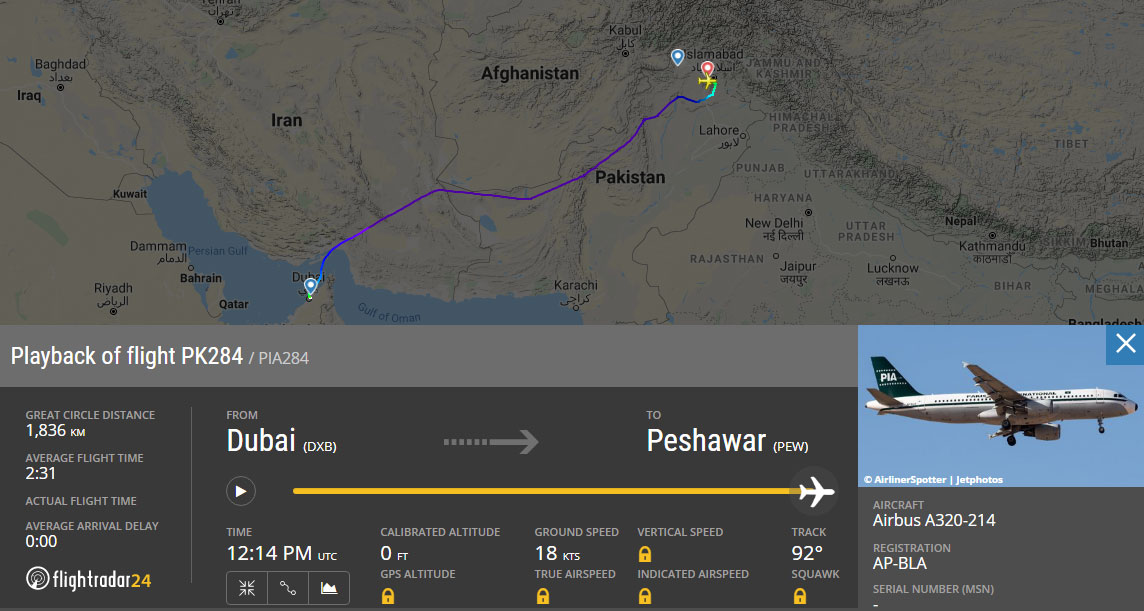 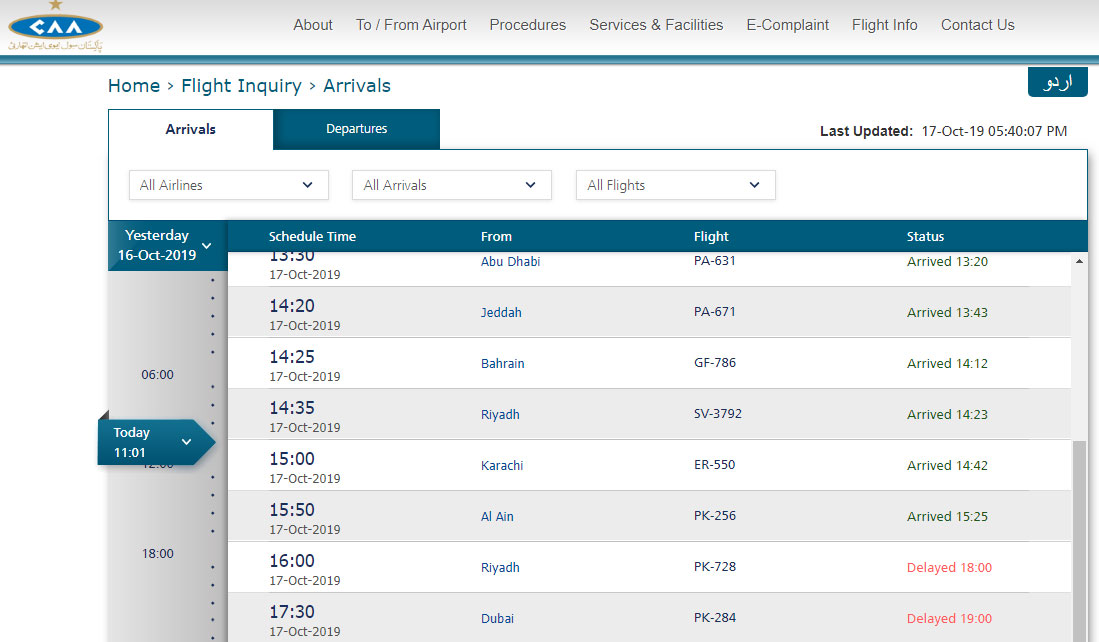 Probably due to bad weather (heavy rain/thunderstorm) Peshawar-bound flights getting diverted to Islamabad. 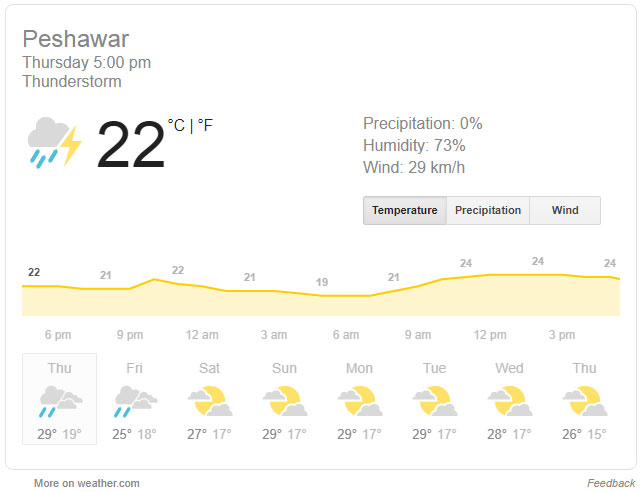 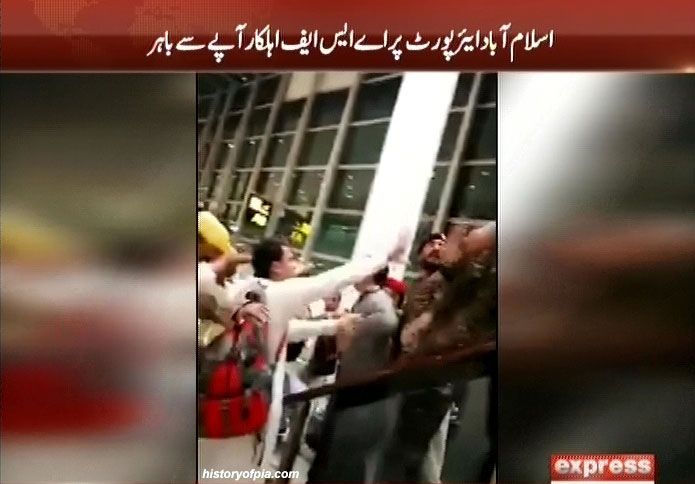 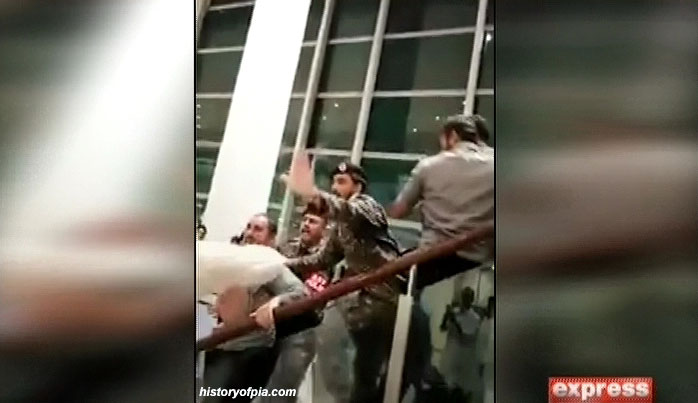 An enraged ASF man standing on stairs spat and threw a chair on protesting passengers below. A female passenger was hit by chair thrown by ASF man. 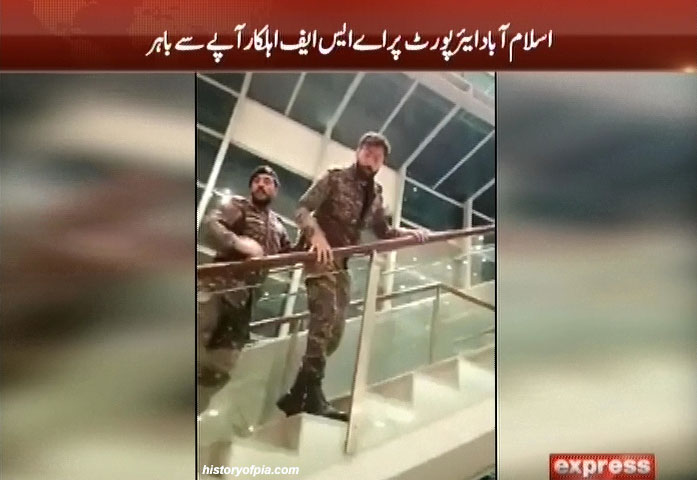 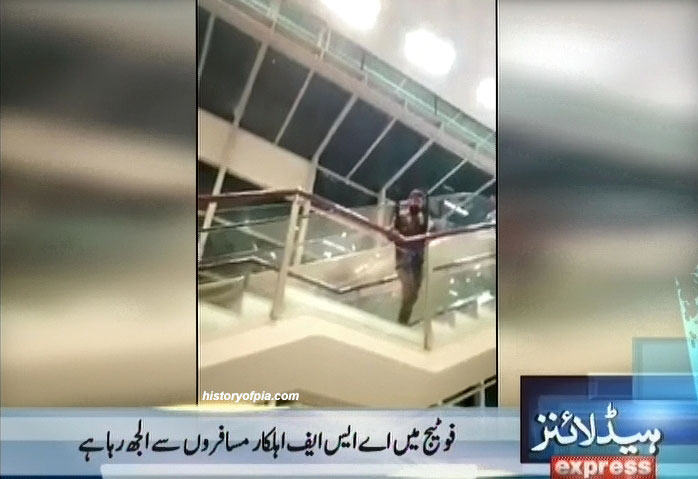 DG ASF has taken notice of the incident.

ASF guy should be fired. In a video circulating on social media the ASF guy can be seen pushing and hitting passengers and through a chair from strayers to hit the passengers which can be fatal.

These type of guys destroying the image of organization.

Passengers must show anger as they were stranded in the waiting area for 8 hours without even water.
Top

CAA has asked DG ASF to submit report of completed inquiry to identify ASF personnel involved in clash with passengers at Islamabad Airport on October 17. Report to be submitted to Aviation Division committee investigating the incident. 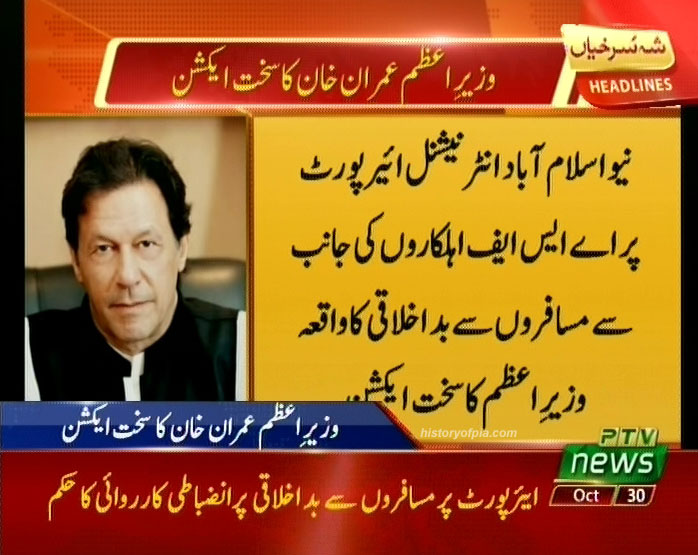 Prime Minister Imran Khan has taken strong notice of the incident in which Airports Security Force (ASF) personnel at Islamabad International Airport clashed with passengers of PIA Riyadh to Peshawar flight PK728 diverted to Islamabad due to bad weather in Peshawar on October 17. A preliminary report of the incident had been presented to the prime minister.

* Islamabad International Airport manager, duty terminal manager have been suspended for not professionally handling the situation.

* Board of Inquiry headed by Commander ASF North Brigadier Irfan Zafar must complete report in ten days. Inquiry board will take action against ASF personnel under Pakistan Army Act 1952.

CAA, PIA and ASF have been directed to take action immediately.

The suspensions came after orders from Prime Minister Imran Khan.

According to sources, the Airport Security Force (ASF) assistant sub-inspector suspected of manhandling passengers was also removed and an inquiry against him was completed.

Sources said two separate inquiries have been conducted and reports sent to ASF Headquarters for further directives. The inquiry report contained CCTV images and interviews of security staff and other agencies’ officials.

“The ASF official may face punishment as he is being tried under the Army Act 1952, because his actions cannot be justified,” a security official said, adding that the issue was not reported to higher authorities at the time because it was settled between passengers and security staff.

Airport Manager Tahir Sikandar and deputy terminal managers Zaheer and Malik Akram have also been suspended and an inquiry has been launched.

RAWALPINDI: The report of an inquiry conducted by the Airport Security Force (ASF) into manhandling of passengers at the Islamabad International Airport (IIA) has been submitted to authorities concerned.

Initially, 12 ASF officials had been transferred to other airports.

According to sources, an additional director, three inspectors and eight other low-ranking officials were transferred apparently for failing to handle the situation. The sources said departmental action against ASF`s assistant sub-inspector, who allegedly manhandled the passengers, the company commander on duty at that time and CCTV in-charge was also recommended.

The incident occurred on Oct 17 when a PIA flight from Saudi Arabia to Peshawar was diverted to Islamabad due to bad weather. After landing, the passengers had to wait for several hours which led to their protest.

The quarrel between the passengers and ASF staff started when the latter tried to stop the passengers from leaving the airport lounge and travel to Peshawar by road. Prime Minister Imran Khan took notice of the incident and on his directives the PIA station manager,assistant station manager and deputy shift manager, airport manager and two duty terminal managers were suspended and inquiries initiated against them.

`One of the ASF officials is being tried under Army Act 1952 because his action can`t be justified,` said a security official, adding the company commander was also found guilty of failing to handle the situation.

The court of inquiry headed by Brigadier Irfan Zafar, director ASF, was directed to initiate proceedings against the responsible officials under the Pakistan Army Act 1952 and complete the proceedings within 10 days from October 23.

* Inquiry headed by a Brigadier has completed inquiry of the incident.

* The ASF man who misbehaved with passengers will be court martialed under Army Act.

* Proceedings to be initiated against ASF Company Commander also.

* ASF's job is to look after airport security, according to inquiry report.

* Handling passengers is not the job of ASF, according to inquiry report.

* Pakistan CAA should have handled the situation/airport administrative matters.

* A number of Pakistan CAA officials also suspended for not handling the situation properly.

ASF personnel to be court-martialled over Islamabad airport brawl

The incident took place earlier in October when Jeddah to Peshawar PIA flight PK-728 was forced to land due to bad weather.

The passengers were agitated because they were not provided with food or refreshments for over five hours. They vented out their frustration by protesting and started moving towards the VIP lounge, the ASF personnel on duty tried to stop them during which a brawl occurred.
A mobile phone footage that had gone viral on social media showing the incident that took place on October 23.

In the footage, passengers and ASF staffers could be seen assaulting as well as using pejorative against each other. An enraged ASF official was also seen spitting at a passenger before hurling a chair at him, the same chair the disgruntled passenger had thrown at the official.

Subsequently, ASF formed an inquiry committee and following its report, the force has decided to court martial the ASF official involved directly in maltreatment of passengers including two other ASF personnel, while seven officers including company commander will face summary trial and administrative action.

Maj Gen Haq said that the inquiry committee in its report recommended action against the officers who showed negligence and found guilty of abusing the passengers.

ASF DG told the Senate committee that the force had decided to court martial ASI Usman under the Army Act for maltreating the passengers.

The proceedings will start in next two days, he said, adding that the summary trial will be conducted against the Company Commander Deputy Director Zafar Iqbal for negligence.

According to the copy of inquiry report available with The Express Tribune, ASF ASI Usman violated the law by spitting, punching and throwing a chair at passengers in IIA making him liable to the proceeding of court martial.

According to the report, ASF has decided to conduct summary trial of the officers present on duty when the brawl broke out that night.

These officials include shift in charge ASI Kayani and Shift In-charge of CCTV Cameras Sub Inspector Ali Gul. In the light of the inquiry report, action will also be taken against the officers who were on duty but showed negligence during the incident.

The summary of evidence charge sheet was recorded against the officials under the Pakistan Army Act 1952. According to the report, Company Command Deputy Director Zafar Iqbal has been accused of poor command and control and irresponsibility, making him liable to summary trial. Summary trial will also be conducted against ASF FIU, In charge Assistant Director Jahangir Ahmed who had failed to provide timely information of the incident.

The report said that all the officers mentioned above will be deployed to remote stations along with postings and convictions and their employment privileges and promotion will be stopped for three years.